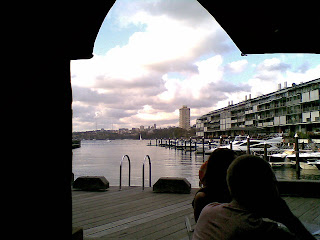 Squeak and I have been haunting the Walsh Bay area now for some years, and in that time have seen a number of restaurants open (and close). It is, no doubt, a prime spot due to the fact that it really is the hub of the Sydney Theatre Company's productions. One place that we regularly return to is Ventuno. This place is in some ways an oddity for this part of town - top location and view, stylish decor, consistently good service and some of the best pizza we've had in a long time.  Oh, and I forgot to mention.... really reasonably priced! 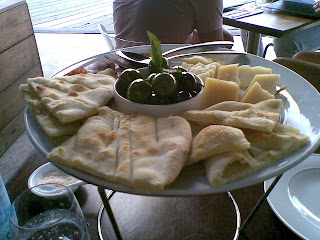 On this occasion we stopped in for some pre-theatre dinner. Ventuno do not take bookings in the evening for groups of less than 8, so if you want to go.... I would suggest you get there relatively early. We get a table outside with a great view of where the beautiful people live with their boats!  Ahhh.. we can dream for a while that we're local.  To start with we order the Antipasto Italiano.  This is a selection of marinated olives, salsiccia, pecorino served with woodfired foccacia bread.  This is a very generous plate of sliced Italian sausage, pecorino in large chunks, plentiful and delicious green and black olives and foccacia bread that is warm and quite flat (which works with the accompaniments).  It is rustic and incredibly tasty.... probably too much food for two people really... but we manage! 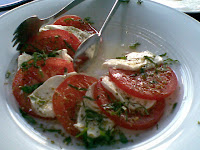 Following this, we decide to order one pizza to share - the Delicato - and a Caprese Salad.

The Delicato pizza was ordered with some degree of trepidation as we have embarked on the potato pizza journey in other establishments before and left somewhat disappointed, but this one sounded delicious - Mozzarella, Potato, Tallegio and Rosemary.  When it arrived it looked like we'd ordered a heart attack on a plate... there was so much cheese!  In retrospect perhaps we'd been naive, especially as it was advertised as having two cheeses on it.  Having said that, it really was incredibly tasty.  Ventuno do thin bases - which is the only way we eat them really, and they are woodfired, which gives 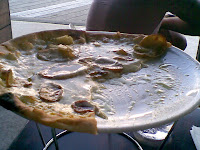 the pizza that really smoky and slightly charred flavour, which really adds to the 'earthiness' of the pizza.  The rosemary, in this pizza, was the flavour that bound it all together and the tallegio really gave it that kick.
If there was any criticism, it would be that perhaps the balance between potato and cheese could have been refined a little.  The amount of cheese did make the base a little soggy, and there were one or two pieces of the pizza where we missed out an any potato.  They do seem like minor complaints however in what really was very good pizza.
For such a rich pizza though, the Caprese salad was a welcome relief as the tomatoes were perfectly ripe, flavoursome and juicy.  That, combined with shredded, fresh basil and creamy buffalo mozzarella (like we needed more cheese!), meant that this salad is one that we order every time we go. 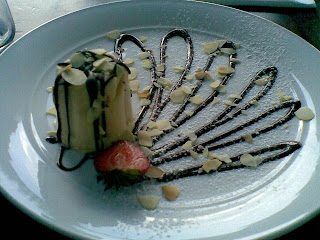 For some reason, there still seemed like a small pocket that could cater for dessert, so Squeak and I opted to share the Semifreddo della Settimana (or a layered gelato cake).  When this arrived, we were a little disappointed, it must be said. We couldn't see any layering, and it was quite small.  It came with chocolate sauce (that did seem to resemble Ice Magic) and a smattering of flaked almonds. It is difficult to judge this dessert. It was nice, but certainly nothing special. The gelato was very creamy, and combined with the almonds, it had almost a nougat flavour. Nothing wrong with it... just not particularly note worthy.  This was mainly disappointing as we have had the Tiramisu on a couple of occasions, and not only is it quite generous in size, it is probably one of the best tiramisus we've eaten.  I guess we had high hopes that weren't entirely fulfilled.

Ventuno is a place that we keep coming back to. They do some of the best woodfired pizzas around and that all comes with some very good service and a view that allows you to forget that you really are not that far from the centre of Sydney's CBD.
Buggles

Posted by Buggles and Squeak at 5:45 PM

Good to know this place is good. I always head to Restaurant Arras when in Walsh Bay, but will try Ventuno next time. Cheers!

I have been intrigued by Venturo so will visit next time.

I love this place. Great food, great vibe and great views. This is how Italian restaurants should be. Thin crust pizzas, great salads and great wine.