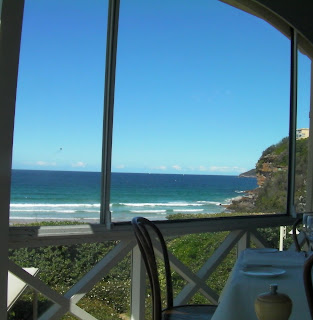 10 years can roll around very quickly and Buggles and Squeak thought that a leisurely lunch at Pilu overlooking the beautiful Freshwater beach would be a fine way to celebrate our ten years together.

Pilu at Freshwater has received many accolades over the past few years and this one was no exception. While many an establishment felt the ire of the SMH scythe (do not even get us started on the clearly defective tastebuds on the reviewer of Vulcans!) Pilu at Freshwater has managed to maintain their standing on 2 hats.


The view is undeniably beautiful, although it must be said that we had not expected it to sit right on top of the beach's carpark.  So while this was a good way to keep an eye on the car (and out for those pesky parking officers), it did, unfortunately, also give us box seats to some of the hoonish and lairy behaviour of some of the Freshwater 'locals' in the carpark.....
So, a word to the wise... keep your eyes averted from the carpark and look directly out to sea.

Food, and how it tastes, is our top priority however and Pilu certainly delivered. We started with a complimentary amuse bouche of fresh anchovy on a crouton with Reggiano. I managed to scoff both because as much as Squeak has become far more adventurous with food, fresh anchovy was just one step too far into 'fishiness'. I was not complaining, with the anchovy being surprisingly mild. The Pane e ricotta that we then ordered was perhaps unnecessary, as complimentary bread was then brought to the table, but it was delicious. Crisp flatbread made with polenta arrived with freshly made ricotta which was incredibly creamy and smooth drizzled with truffle abbamele, which is a 'Sardinian product made from slowly cooking honeycomb, honey, pollen, lemon and orange zest'. This sounded interesting, and it tasted really good. The marinated olives that accompanied this were also very good. 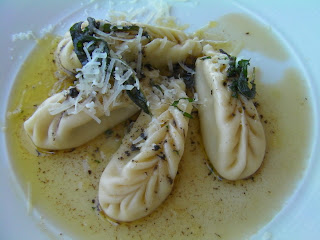 Squeak had decided that her low-carb policy was out the window thanks to the special occasion, so went all out and ordered the Ravioli of potato, mint and pecorino served with butter, sage and a touch of truffle. They were soft, but not mushy and very well balanced. Beautiful to look at, and a delight to eat.

I ordered the cured and smoked King Salmon with shaved fennel, baby beets and shaved bottarga. The serving size on this dish was very generous and the plate of food itself was delicately and beautifully presented. The salmon was delicious and the fennel went beautifully with the sweetness of the golden baby beets and the saltiness of the bottarga. (I will admit to having no idea what it was.... but it is a salted and dried roe - which frankly is right up my alley.) 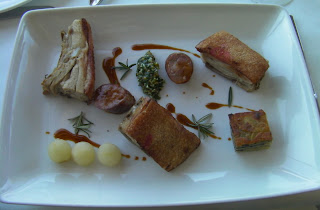 We forged ahead to mains and were not disappointed. I could not pass up the various cuts of oven roasted suckling pig served on the bone with a traditional farmhouse suckling pig sausage. When this arrived in front of me I was very happy with my choice, and I think Squeak was envious - despite not eating pork (it is apparently 'too piggy'!). It looks like a large dish on arrival, but because the pork is still on the bone, there wasn't too much. On  looking at the picture, I note the very small amount of sauce, however when I was eating it, this did not occur to me. The meat was very moist and tender, the sweet/tart apple balls cut through the pork and the crackling was THE best crackling I have ever had - even Squeak had to have some of that. It was a really delicious and hearty dish where all of the flavours on the plate had a purpose. 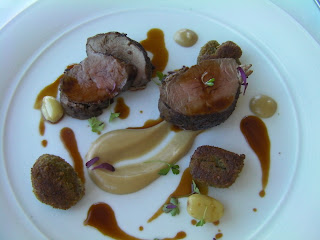 Squeak had been hoping to order the hangar steak which she spied on the menu online, but alas it was unavailable. She ordered the Milk fed veal instead which came with herb crusted porcini mushrooms, porcini cream and roasted garlic. This dish was also a delight to behold and the the meat, beautifully pink, was incredibly tender with a subtle sweetness that matched the roasted garlic. The combination of mushrooms (crumbed & creamed) added earthiness & texture. Magnificient!

We ordered a mixture of the Roasted potatoes with fresh herbs and sea salt and the seasonal vegetables of the day, which were brussel sprouts tossed in olive oil and pancetta. These were all perfecty cooked and very flavourful.
Now up until this point, Squeak had been adament that at this lunch we were going 'all out'. We were going to order three courses as well as a cheese course. This is something we can never normally manage, but we were determined to do it. Given the generosity of the portions however, this was again an unachievable feat. We decided to sit for a while and enjoy the beautiful vista while perusing the dessert menu. 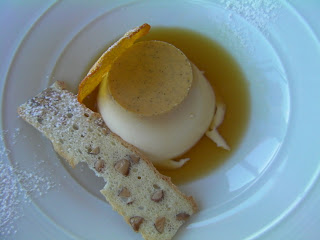 Squeak ordered the Vanilla bean pannacotta with abbamele (minus the truffle this time). The wobble on this pannacotta was very encouraging. The texture was perfect and balanced well with the accompanying biscotti. The creaminess of the pannacotta was beautifully offset by the sweet, citrusness of the abbamele. Squeak also decided to order a dessert cocktail and ordered the 'Noci' which was Italian brandy with Nocello walnut liqueur, Frangelico and vanilla syrup which was then shaken with ice and then strained. It was a big boozy hit. 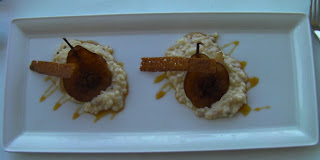 I ordered the Vermentino poached pear with fregola pudding and ginger crisps. I had no idea what fregola pudding was, and when it arrived it reminded me of a rice pudding... which I happen to like. The pears were firm, but soft at the same time, and deliciously sweet. This was accompanied by the creaminess of the fregola pudding (which, as it turns out is actually a semolina pasta, similar to Israeli couscous). The softness of these elements was then contrasted with the sticky, crunch of some very thinly sliced and 'toffeed' pears and the warm spice of the ginger crisps. It was a successful and delicious dessert - all the more so for being unexpected.  I followed this with a latte - and it was perhaps one of the best coffees I've had in some time. 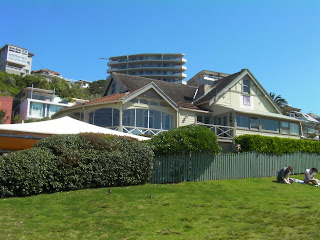 Pilu at Freshwater is a beautiful restaurant, both in and out, the service was warm and professional. The food was generous, full of flavour and a delight to look at. It is not a cheap restaurant... but why should it be? We came away, however, not spending as much as we had anticipated, which has to be a bonus.
All of this was marred somewhat when, on leaving, we had to listen to some quite unsavoury remarks being hurled our way from the 'locals' across the aforementioned carpark, which was an unfortunate final taste to what was otherwise a lovely celebration of our day.
Buggles

Posted by Buggles and Squeak at 2:33 PM