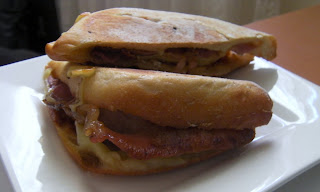 
So, as anybody who has driven through Sydenham knows.... there isn't a great deal there (other than desperate inner west residents wanting new, funky cafes!) There has been the relatively recent opening of Rosa's Kitchen (which even though we've been again, still hasn't managed to hit the spot with us), but now Platform 7 has opened and given us a ray of hope.


Platform 7 has both a good and bad location. Good - because it really is just across the road from the station, so commuters should be able to grab a coffee on the way to work, but bad because it is just tucked around the corner of the main strip, so many may miss it.

I decide to pop in for a preliminary scouting mission.  The whiteboard outside looks promising with things like ricotta hotcakes and chorizo, manchego cheese and caramelised onion panini's.  I order two bacon and egg panini's to go.  I am a little surprised to see a couple of ready-made panini's get popped into a microwave.  I had expected them to be freshly made. In hindsight, I suppose that a cafe aiming to target commuters wants to be able to get their food out quickly though. The panini's are then placed into a panini press which does mollify me a bit. The sandwiches are good though. Perhaps a little more BBQ sauce would have been good, but that is just personal taste. 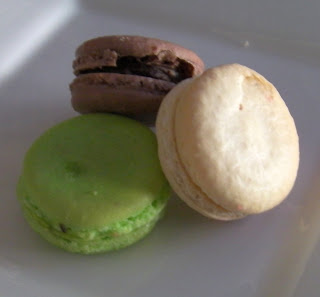 I am a bit of a macaron fiend, and when I spot they they have some that have won some gold and silver awards at the Royal Easter Show, I decide to pop them onto my order also - chocolate, vanilla and pistachio.  They are bitesize and I'll be honest.. a bit pricey for what they are at $1.50 each. They are flavoursome though, and this is something that occasionally macarons lack.

So, in all I am happy this little spot has opened. There is potential shown with all manner of sweet and savoury items on the menu, not to mention they serve organic, fairtrade coffee.  We'll be back and hope to see it succeed.  Keep hanging in there Sydenham and Tempe-ites... there is hope for us yet!
Buggles

Posted by Buggles and Squeak at 12:48 PM

I went there last week and found a little insect in my roll,bastards I'll never go there again

It is a shame this cafe is so far not living up to expectations. The area is in dire need of good cafes.
Still hope Platform 7 manages to get its act together.