A night out with Heston Blumenthal... 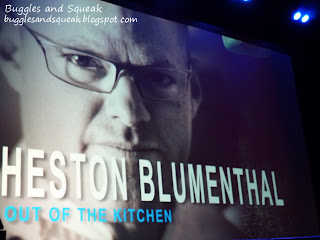 What better way to spend a Tuesday night than catching up with our old pal Heston Blumenthal? To hear all about his past, present and exciting future. As we sat there merely metres away from the food genius himself we were almost able to forget that he was not only our 'pal' for the night, but that we were sharing him with 2000 others at the magnificent State Theatre in Sydney.  Oh well... at least we were in the front row!!!!
Feeling very much the VIP's we were able to sweep imperiously past all of those poor people in the nosebleeders with our signed copy of the latest book to settle into our front row seats - ready to be inspired. 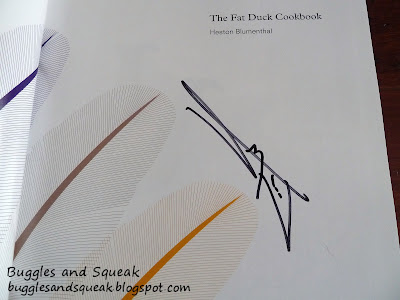 Heston's Sydney show was titled 'Out of the Kitchen' which I guess should have been an indication that there was not going to be any magic occurring onstage but we were hoping that a bit of a demo might happen... our hopes were in vain however as the evening really was just a bit of a chat really. 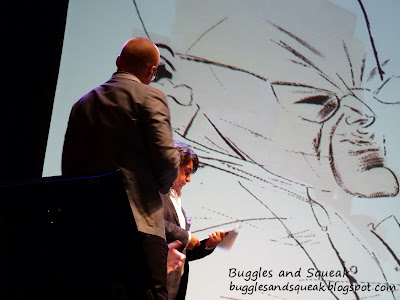 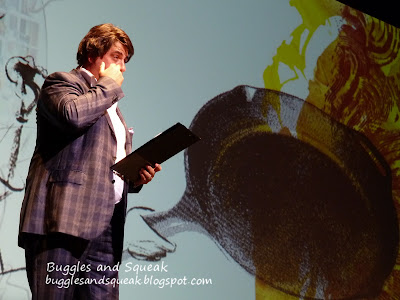 Matt Preston (whom I ordinarily love - but on this occasion seemed a little more intent on emphasising that he and Heston are mates) hosted the evening which began with a bit of chit chat and a few questions about his beginnings and process. We learnt about some of the obstacles he faced from council and locals when trying to open The Fat Duck as well as the fact that The Fat Duck largely constituted his first real cooking job!

More importantly Heston (because we are pals now!) spoke about food in the UK in the seventies and one of the first moments he knew how important food was to him and how integral the senses were in creating the entire experience.  He explained how he felt the need to create the sensory experience for diners as he couldn't provide the seaside, or the carnival or the 'Loire Valley' atmosphere via the restaurant itself.


We really began to tingle however when he began to run through a few key dishes, their inspiration  and creation. The famed Sound of the Sea dish was up first with an accompanying video and explanation of the individual elements of the dish including the seashell and accompanyiong ipod.  The explanation of the Mock Turtle soup (while familiar via 'Heston's Feasts') really showed how he is able to create dishes that truly bring out the childlike fascination with the fantasy world.


The Flaming Sorbet dish was truly remarkable with the leather, crackling 'fire' (courtesy of pop rocks underneath), twigs and tobacco aromas - not to mention the sorbet itself that is set alight and doesn't melt! Truly spectacular.


We just loved the explanation of the petit fours - one of which was 9 months in the making! One aerated mandarin chocolate! The processes involved in creating one perfect chocolate is truly a sign of his genius (madness? I'm sure it's a thin line.) It looked magnificent however and had my mouth watering.


The next description of how the Queen of Hearts card is made was equally amazing and by this stage we were dribbling over ourselves. White chocolate, wafer thin shortbread and berry 'jam'... all held within a little envelope with a 'wax' (chocolate) Heston seal. Cute!
The pinnacle segment to the show however came when Heston outlined the new direction for the booking process for his restaurant. Seeing as you often need to wait months between booking and attending the restaurant he wants the experience to commence straight away. So, on booking, people will now receive a link to a website that allows them to 'visit' it three times prior to their reservation. An animation has been made that takes them into a surreal Heston/ Lewis Carrol/ Willy Wonka wonderworld with hints and clues at the journey that awaits... all leading to entry into the 'Sweet Shop'. This would then all lead to the future diner receiving a 'sweet bag' when leaving the restaurant. 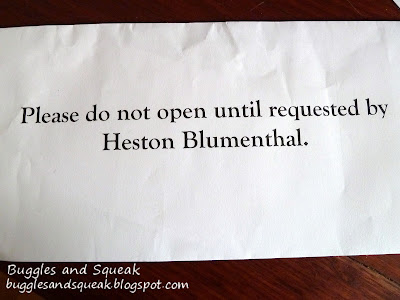 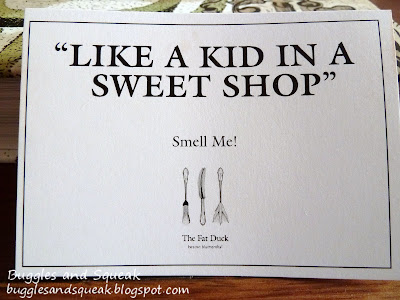 It was at this point in the evening that we were asked to open the envelope handed to us earlier and to sniff the enclosed card.  What magic was this? As each of the lolly flavours were mentioned 'Strawberries and Cream', 'Licorice', 'Lemon/Lime' etc... that is exactly what I could smell on my card! 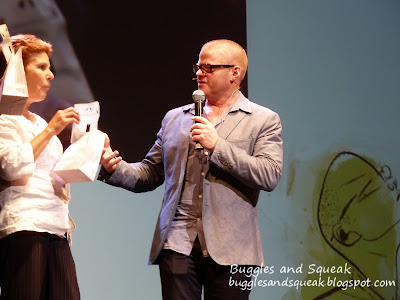 We almost killed ourselves in an attempt to be selected to go up on stage to sample one of these sweet bags... alas it was not to be!  On stage four lucky people got to sample the Queen of Hearts card, the Aero chocolate, an amazing apple caramel with dissolving wrapper as well as a really cute bag of coconut 'baccy'. 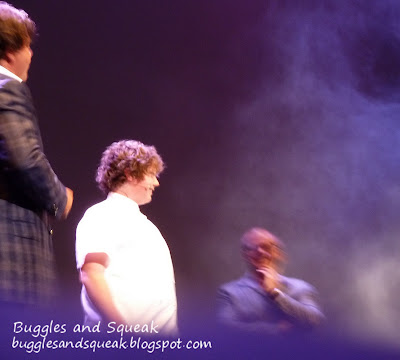 The evening also included a meeting between Jack (of Junior Masterchef fame who recreated the famous Snail Porridge on the show) with Heston himself... which was a bit exciting for him, I'm sure. Then there was a bit of a casual Q & A with Matt Preston and then the audience.  We had to endure one inane question from an audience member regarding portion sizes that just left me wondering why this person was there at all if they do not get the point of the food journey that is a degustation menu... oh well... 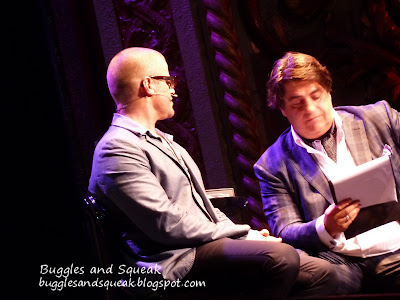 So, the evening did lack some actual cooking on stage which would have been amazing, and it really would have been great if more people (actually... just us would have been fine) could have sampled some Blumenthal delights... but we cannot deny that we are completely besotted with the ginger man himself. We have always wanted to dine at his restaurant... but now it is a need!

Is it too indulgent to travel to the UK just to dine at one restaurant?

Buggles
(P.S Apologies for dodgy photography... had to keep it a bit on the 'down-low!  Many thanks to SBS Food for this amazing experience)
Posted by Buggles and Squeak at 11:49 AM

Sneaky photos huh? LOL. I guess that's the life of a foodie paparazzo! :-) What a fun night you had and what an experience to hear Heston talk. Love the old scrath 'n sniff cards too.

I was so sad I missed out on this, I heard so many wonderful things about the envelope and the changes to the booking policy.

I hate that you can't book more than two months in advance and need to call every day to try and get through. We're headed there next year and wanted to book, but it just may not happen.

I wish I had seen this review before I paid $145 each for two tickets to the Sydney show recently - very disappointed with the lack of cooking, lack of interaction and general disinterest by Heston it seemed. And I wasn't the only one!

Saw it in Perth tonight...very disappointed. Expected some magic on stage but none forthcoming. Seemed way too staged/scripted,, clumsy advertising & a bit "this is your life" rather than what could have been an enlightening experience.