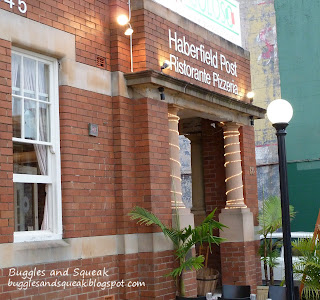 
Squeak and I are always up for a bit of Italian and woodfired pizza and Haberfield is often the place to go for this style of food. Everyone has heard about La Disfida and Napoli in Bocca, but we decided to give Goloso, situated in the old Haberfield Post Office, a go. We were a little dubious initially as many of the reviews on the 'Eatability' website were luke warm, but we always prefer to judge a place on our own experience.

On arrival we noticed that the space is quite large, bright and busy. We are seated quickly, but then had to wait some time before anybody came to take our order. The menu offers many of the usual suspects - breads, antipasti, pasta, pizza and a few meat dishes. We chose to go for an entree each as well as a couple of pizzas to share. 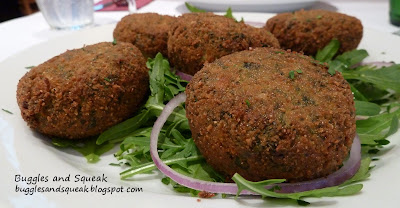 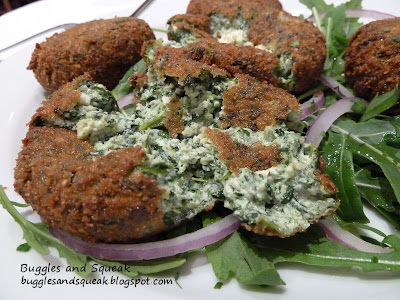 Squeak ordered the Bocconcini di ricotta & spinaci. We weren't entirely sure what this translated to, but Squeak likes ricotta and spinach - so didn't think she could go too wrong. When these arrived we were a little surprised at the size of the dish as it was quite large, and probably is more suited to sharing. The coating was crisp and contrasted nicely with the soft filling of spinach and ricotta inside. I had a few bites of this dish and found there was the slightest hint of sweetness to the coating which I found to be a little odd, however Squeak enjoyed the dish very much - even though she thought it was a bit too big. 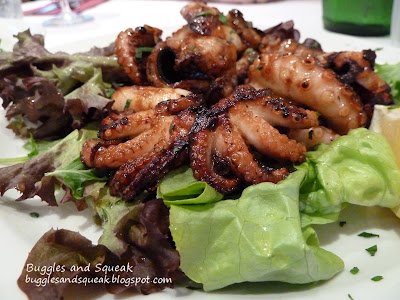 I ordered the Grilled Octopus. The octopus had some nicely charred bits which added a good textural element to it, and the octopus was nice, if a little bit tougher than I usually like. I think this dish was well sized for an entree. 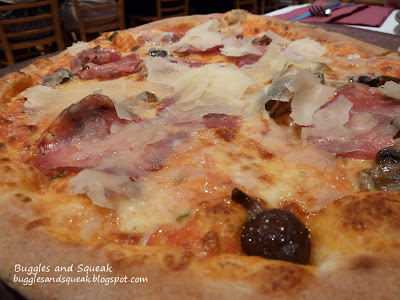 When the two pizzas emerged we were quite surprised by how big they were - they were very big. The base however was nice and thin - which is our preferred option. First up was the Toscana pizza which had salami, porcini mushroom, funghi trifolati (which is apparently sauteed mushrooms), shaved parmesan and mozzzarella. This pizza sounded (and smelt) great! The base was cooked well in the woodfired pizza oven, it was a little chewy and charred which works both texturally and flavour wise. There was a good covering of the toppings without going overboard and everything worked well together. 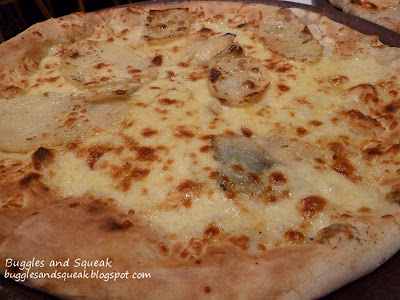 The second pizza we ordered came from the Pizza in Bianco menu (which meant that these pizzas came without the tomato sauce) and we chose the Alle Patate pizza which had mozzarella, sliced potatoes, pepper, rosemary and parmesan cheese. We love a potato and rosemary pizza so generally order it wherever there is one offered. This one tasted good, but I felt could have had a little more potato, a little more rosemary and a nice sprinkling of sea salt flakes on top. The rosemary and salt really set the other flavours off nicely. It was however a good pizza, and we enjoyed it. Needless to say we could not finish both pizzas - especially not when dessert is obligatory when a tiramisu is spied. We ended up being able to take about half of each pizza home. 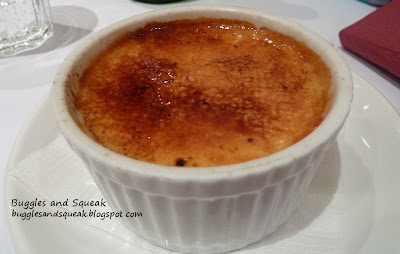 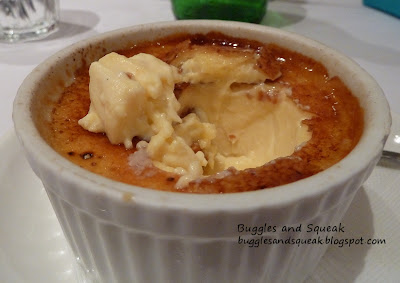 For dessert we decided to try the Creme brulee and the Tiramisu. We often look at both of these desserts as a bit of a litmus test, seeing as we think we are quite the experts in their fields - from extensive tasting experience!
The creme brulee had a good solid toffee top that gave the requisite crack after a very solid thwack with the spoon. This brulee grew on both of us as we ate it. Initially we were both disappointed in the texture of the custard beneath the toffeed top. It was too firm, and didn't have that lush silky texture that really sets a good creme brulee apart. Having said that, however, as we continued to eat it, the flavour of the custard began to stand out. It had an almost citrus twist to it which was quite nice. 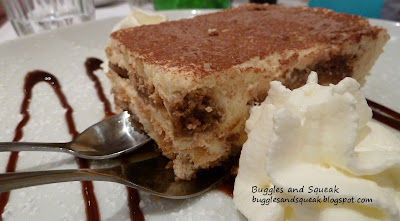 The tiramisu was good, but not great. I liked the fact that it wasn't drowning in mascarpone cream, as I find that some places overdo it, however Squeak felt that there wasn't a strong enough coffee and booze hit.  So while this was quite a decent sweet end to the meal, it certainly comes nowhere near the tiramisu from Cafe Sopra.

To be honest, we left Goloso feeling perfectly satisfied by our meal and glad we were not put off by the 'eatability' reviews. The leftover pizza (on the reheat the following day) stood up well and we think we will probably return.

Posted by Buggles and Squeak at 6:43 PM