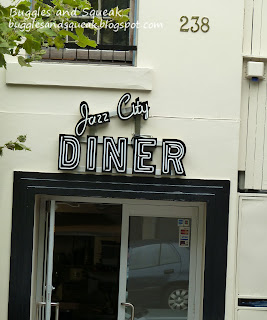 **UPDATE - We did revisit Jazz City Diner again and can happily report that this visit was glitch free! The burgers were great (as they always have been), the fries were better than they have been and the Peanut Butter Milkshake - OMG!**


American 'diner' food has always held fascination for Buggles and Squeak, and for me personally, I blame it all on Happy Days.  I am still waiting for the time that a little tray can be popped onto the side of the car and waitresses can take and bring my order via rollerskates. Until that day comes, both Squeak and I must make do with the burgeoning number of American style restaurants that have been popping up over Sydney of late.  The Jazz City Diner being one of the most recent ones to open its doors late last year. Squeak and I decided to drop in for a bit of a sneaky midweek lunch. 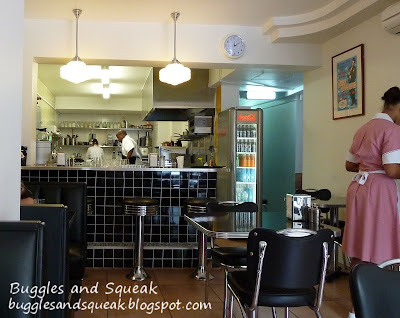 The space is quite small, but has seating for probably about 25. There are the obligatory booths - which we love - as well as some very retro laminex looking tables and chairs. Despite the retro look, it is incredibly clean - stark almost, and possibly a little clinical looking. The look is warmed up a little with some great old time jazz posters and very retro looking, but ultra modern , mini screens at each booth playing old jazz clips. These were only played for a short while when we were there however - but it is a great feature. 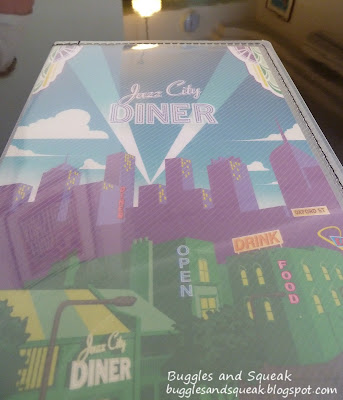 The menu is New Orleans inspired and we see words like braised, grits, jambalaya... We are immediately struck by how many things we would like to try. We really do want to try out their burgers, but we also really want to try some of their very southern main offerings as well. We compromise by ordering a slider each to start with, and then a main, as well as the obligatory (aren't they?) milkshakes. 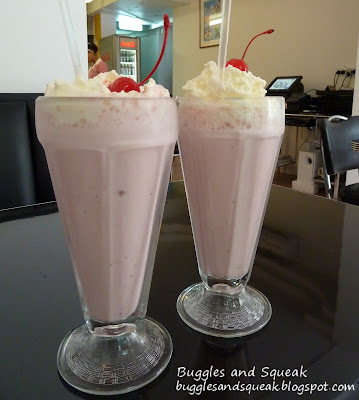 The two strawberry milkshakes arrived first and they looked picture perfect. The straberry flavour was beautiful and real! There were even strawberry seeds at the bottom to prove it! 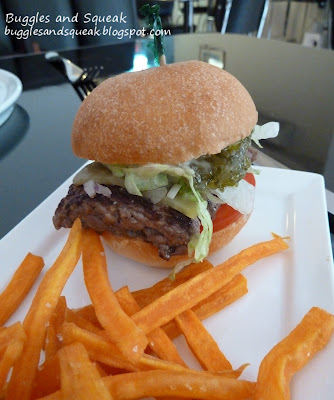 Squeak ordered the blue cheese beef slider. When it arrived it looked very tasty, and was accompanied by some sweet potato fries. The fries were crispy which is a welcome change to the rather wilted sweet potato fries we have experienced elsewhere in the past. The slider itself was really good, but unfortunately Squeak could detect no blue cheese flavour whatsoever. 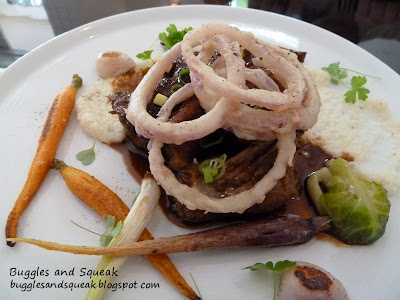 I ordered the Pork Belly slider (I can sense your confusion based on the photo already... read on!) When the dish arrived it looked nothing like a slider AT ALL (as you can see)!
I queried the waitress about whether or not that was the 'slider' or one of the mains, she assured me it was the slider and laughed that it was a 'bit big'.  I questioned it again, and she went to ask the chef. She returned to assure me that it was indeed the slider and conceded that it was a very large dish.  I wasn't entirely convinced, but as the chef has worked at Vue de Monde I thought maybe he was doing some kind of strange deconstructed version of a slider. I tucked in.  It was revealed later (when the mains came and we saw that a mistake had been made) that the dish I had just eaten was actually the braised beef shortribs (I had just thought the pork was very mildly flavoured!). So... the mistake aside, how was the dish?
The meat was very tender and the Coca-cola braise was sweet and delicious. The cheesy grits were not what I was expecting, and to be honest, not to my taste. That is not to say others may disagree, but I just wasn't a fan. So, while it was quite a good dish, it wasn't what I had ordered - despite my continued questioning. 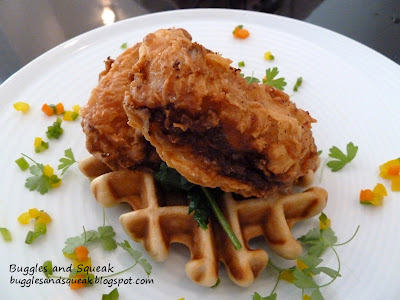 As my main (yes... I know - another one, but in my defense, I had been told my starter was just a 'slider') I ordered the Chicken and Waffles. Now this was what I really wanted. This was crunchy fried chicken atop spinach and a Belgian waffle with a pot of maple syrup on the side. I can hear the Heart Foundation now!!  However the chicken was not remotely greasy or fatty, it was deliciously crispy on the outside and moist on the inside. The maple syrup really added a beautiful sweetness and flavour to the dish - but then again, I have always been a fan of maple syrup with savoury flavours. My only (and fairly major) complaint about my meal was that I really could not enjoy my Chicken and Waffle dish fully as, frankly, I was full. I had just had the braised short ribs, I really could not fit in a second dish. As a result I didn't finish my meal and I couldn't completely enjoy it.
The problem with the whole scenario was that Squeak had actually ordered the Coca-Cola Braised Beef Short Ribs for her main meal which came atop cheesy grits and served with onion rings and baby spring vegetables. What she was presented with, however was the Oven Roasted Pork belly. Immediately it became apparent that our order had been taken down (or entered) incorrectly.

We questioned the dish and after consultation with the chef, we were told that my original starter was actually the beef (...and not the pork belly slider - REALLY?), and a mistake had been made in the order the dishes had been brought out. No offer was made to take the pork away and bring out the beef as had been ordered.


We alerted the waitress to the fact that I had ordered a Pork belly SLIDER to start, and Squeak had ordered the braised short ribs as a main, and that she didn't actually eat pork and couldn't eat the dish even if she'd wanted to - and still no offer of replacement. I asked if we would have to pay for the dish, and we were told 'No - not if you're not going to eat it.'


We asked what she could eat then? The chef then came over to sort the problem out. Squeak was told that she could have whatever else she wanted from the menu.


This was generous and appreciated - but to be honest we really felt that no-one actually understood that our order had been taken down incorrectly and we weren't actually getting what we had wanted, and frankly they weren't really that apologetic. We had ordered a slider each and a main each and we each only ended up with one dish that we actually wanted (well - two overall, but I ate both of them),  but we were kind of made to feel that we were the ones who had made the mistake (plus my dish wasn’t taken away to be kept warm while Squeak’s was made – which is a real pet hate of mine! People do go to lunch together so they can eat TOGETHER!) And, yes – I do know that I make an excellent candidate for Australia’s version of Grumpy Old Women. 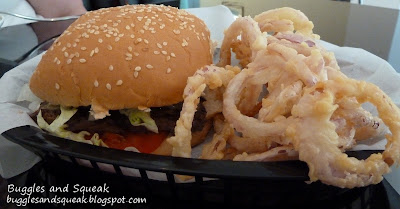 Anyway.... Squeak had a Cheesburger with Onion Rings. The cheeseburger had great flavour and came with a delicious pickle relish as well as onion, tomato, lettuce and mayonnaise. The onion rings were very lightly battered and very crisp. This was an excellent burger... and very filling. 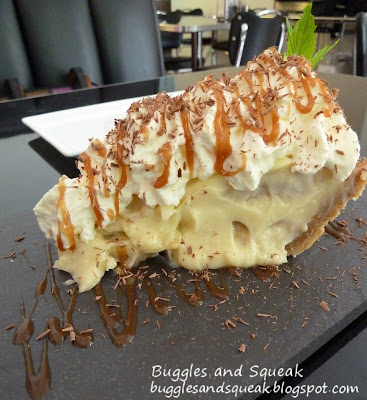 We had read a lot about the desserts at the Jazz City Diner and even though we were both (me particularly) full, we had to get one to share. We ordered the Banana Cream pie. It arrived on  a piece of slate which certainly showed off the dish well. The banana cream pie was excellent - it was rich, creamy, banana-y and completely delicous!
Anyway.... the issues with the ordering aside... the food is very good. It has amazing flavour and the chef clearly knows his way around food. They really do need to sort out issues with the ordering however, as well as how to deal with the errors once they are made aware of them, because this part of the lunch really did dampen our experience of it.
That is not to say we won't go back - I have to have the chicken and waffles again when I have an empty stomach (and we would be keen to try out the Pecan pie next time.) The chef did ultimately sort out the problem, and we didn't have to pay for the unwanted pork belly, or the replacement cheeseburger. We would hope, however, that the sorts of issues we experienced would be ironed out by then, and we could actually eat the food we had wanted on the day.
Buggles

Posted by Buggles and Squeak at 12:15 AM

At least the food is good, but quite a schemozzle with the ordering and whatnot. I'm sure once that gets worked out everything will be peachy.
I hope it lasts that long because a good American diner is certainly welcome this side of town.