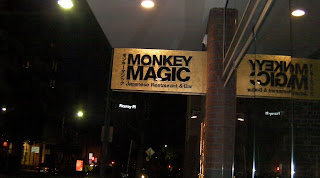 Squeak and I decide to hook up with an old friend (in time, not age) who has recently moved back to Australia's food capital (c'mon... we all know it's true!) for a pre-election dinner. We figure we are either pre-celebrating, or pre-commiserating!  Asian food is not a cuisine that Buggles and Squeak routinely go out for...we're not sure why.... we just don't find many that really make our toes curl! Tonight however we decide to give Monkey Magic a burl. To be honest I think the choice has more to do Squeak's childhood memories of her favourite TV show, than the actual food... but to Surry Hills we head!

The decor and atmosphere of this place is definitely 'cool', and really does epitomise Monkey Magic's self description as "Modern Japanese cuisine with a touch of New York flair". It is the perfect place to unwind after the working week, and the first way to do this is to get a drink.... for me it was the 'Sakura Blossom' which I ordered as much for its name as its contents which advertise as 'an arotic mix of vodka, cherry, agave with a hint of lime.' Delicious!  Squeak and C1 both went for the more refined white wine options and nab a Tamar Valley Pinot Gris and a Clifton Bay Sauvignon Blanc respectively. And we were off... 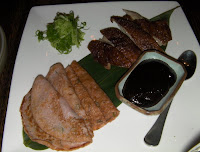 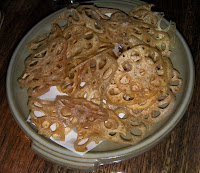 To start with we decided to share some Renkon Chips which are crisp lotus roots with pink salt, as well as the Duck Pancake. The Renkon chips were a revelation - crisp, salty chips... yum! The Duck was roasted and came with buckwheat pancakes and dark miso sauce and they were a tasty way to start the meal. C1 was particularly chuffed to find her gluten free status so beautifully catered for, so we generously allowed her to snaffle the last one. In all honesty this was really so we could scoff the lion's share of the Renkon chips unnoticed! 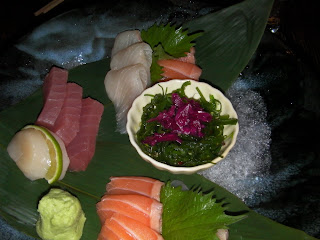 C1 and I ordered the large Assorted Sashimi plate to share. I will admit to some reluctance here, as I did predict that I would want to eat the whole thing myself, however Squeak and C1 convinced me that combined with the Wok tossed mushrooms and the Monkey Magic salad we'd also ordered, that I would be fine. I decided to concede, but only because I secretly knew that I would then be forced to order dessert! The Sashimi did arrive first - which was one glitch with the evening, as they obviously assumed that we were all sharing the plate, and so did not bring Squeak's main until later... they probably should have checked with us first. 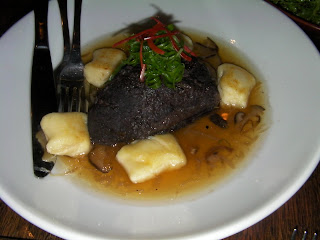 However C1 and I were not going to hang about so tucked in. The old adage that we 'eat with our eyes' could have no better example than this Sashimi plate. It was beautiful. I'm not really sure what all the types of fish were, but I do know the salmon was a real standout for me. The wasabi was intense and the fish was fresh, meaty and full of flavour. I would have easily been able to eat the entire thing - happily.
Squeak ordered the rather interesting choice of Braised Beef Cheeks which came with goat cheese gnocchi in a soy and mushroom broth. I will admit to being dubious about the possibility of success with this dish, but I was certainly proven wrong. The meat was incredibly tender and moist, the gnocchi were light and the broth incredibly flavoured.  It was truly a successful fusion of East and West.

We all shared the Monkey Magic Salad of mizuna, radish, baby beetroot with a yuzu dressing. It was fresh, crisp and a good accompaniement to the meal, but the winner side dish was the Wok Tossed Mushrooms and lettuce hearts in a Citrus Miso,  the mushrooms  were meaty, the lettuce deliciously soft and the citrus miso that it all bathed in was absolutely delicious. I would go back just for these. 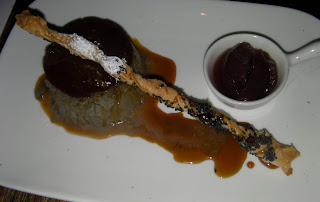 We all decided to order some dessert, and on reading the menu you can see that the attempt to put an Asian take on tradional dessert favourites was in play again. C1 and Squeak both ordered the Black Sesame Creme Caramel with Red Wine poached pear and Puff Pastry twist. When it arrived, I have to admit I was not enthused for their experience. However I heard murmurings of 'Oh my god,' and 'This is sooo good,' so I decided to sample it for myself.  On tasting it, I was really proven wrong, as the texture was smooth and the flavours were perfect. 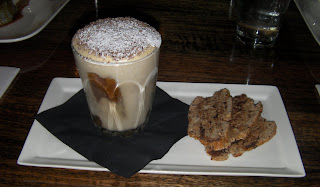 I ordered the Tiramisu .... really because I think I wanted to demonstrate that you really cannot fuse certain things together.  The description of the tiramisu just sounded like a strange combination of flavours - White Sesame infused Tiramisu with a Macadamia nut Biscotti. Once again.... proven wrong. The tiramisu was delicious. I will be honest, I don't think I could taste any white sesame, so some may argue that it was unnecessary. For me however, it just has to taste good. It did - so it was a success.


In  all, Monkey Magic offers delicious, interesting dishes in a stylish space at relatively reasonable prices. The best sign of success for a restaurant has to be the question, 'Will you return?' In this case, the answer is a clear 'Yes - we will!"
Buggles

Posted by Buggles and Squeak at 12:59 PM