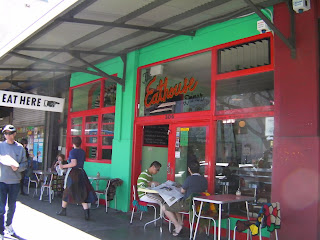 As observant readers of Buggles & Squeak will know, Squeak has a real penchant for all things 'Americana' when it comes to food. So when we read about the opening of the Eathouse Diner and we saw the words 'Southern Fried Chicken and Slaw', and 'Philly Cheese Steak Rolls' I knew that we would be heading there very soon indeed. 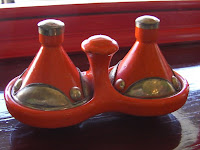 Eathouse Diner is located in Redfern, just down from Baffi & Mo, and on approaching the diner, we could tell we might struggle to get a table. The place was packed... good sign. The decor and  'vibe' of this place is really very 'cool' but in a familiar, comfortable, eclectic and rustic way. It is quite remarkable that they have managed to make the interior look like it has been there for years and years, and had accumulated a load of knick knacks along the way. 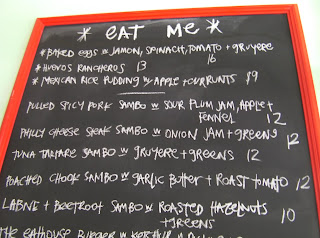 As we peruse the menu we notice that it is decidedly limited at lunch. There were few of the options that had had our mouths watering since we'd read about them. However, Squeak has always had a hankering for a Philly Steak roll, and there was a 'Philly Cheese Steak Sambo with onion jam and greens' and I have enjoyed a 'pulled pork' roll in the past, so thought I would order the 'Pulled Spicy Pork Sambo with sour plum sauce, apple and fennel'.  I was very excited about this choice, especially because of the flavour combinations at play. I also decided to accompany this with a 'Dulce de Leche milkshake'. 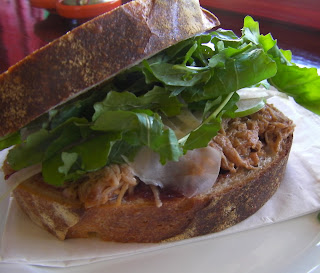 This is where things don't pan out so well. The sandwiches arrived and they looked fresh, but not really like the ones we have seen and experienced in the past. But that is okay, it is of course the taste that matters most. My Pulled Pork sandwich was underwhelmimg. It was not bad... it was quite pleasant. The pork did have a nice flavour and was quite moist, however it was the crunch and sweetness of the apple, and the sour plum sauce that had got me particulalry excited, and to be honest there was so litle of both apple and sauce, that apart from one or two moments, I really would not have known they were on there.
The Philly Cheese Steak sandwich was very disappointing also.  Philly Cheese Steaks really are not meant not be made with cream cheese,  but rather with lashings of melted Provolone or American cheese. So, while we are happy to concede that this may be the Eathouse Diner's interpretation of a Philly Cheese Steak sandwich, it really does not capture the spirit of what it is designed to be. Anywhere else this sandwich would be called a Roast Beef with tomato, rocket, cream cheese & onion jam. Philly Cheese Steak it is NOT! 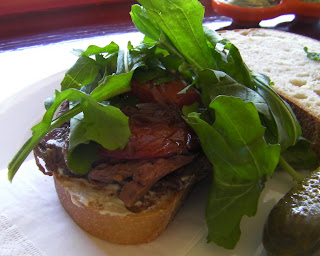 So, all up we left feeling quite underwhelmed. Don't get us wrong, the atmosphere of this place is great, the service is incredibly friendly (even though Squeak's sparkling mineral water was cleared away half finished & just as she was about to have another mouthful), and the food we had was quite okay. But, they were just standard sandwiches that we would expect to be able to buy at any decent sandwich shop in the CBD (and for considerably less cost).
As most people who know us would attest - we have absolutely no problem with paying premium prices for really tasty food. The Chicken Sandwich and the Hot Beef Sandwich from Danks Street Depot are incredibly generous and really tasty, flavourful sandwiches and while they cost more than the Eathouse sandwiches, they are so definitely worth it. We left the Eathouse Diner wishing that we'd gone to Danks St Depot instead.
We have not written this place off though. We really WANT to like the Eathouse Diner, and certainly many other reviews have been lavishing praise on it already, but we will reserve our final judgement until we have returned for dinner. We'll see what happens then... stay tuned!
Buggles

Posted by Buggles and Squeak at 3:57 PM

i want to try this place now. sounds very interesting :-)

It appears the 'Eathouse Diner' has abandoned lunches & is concentrating on dinner only....a good idea I think, the lunches were nothing speacial.

We went to this place for dinner looking forward to the Philly Steak sandwiches and other traditional American food, but soon realised the menu was not going to satisfy.

The food was not what you would expect from typical American food... eg. grilled fish with a caper & parsley salad and the food was average.