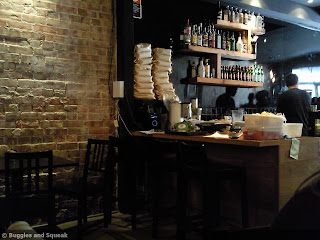 Buggles and Squeak had been hearing a lot about this new cafe/bar on Addison Rd. A new cafe is always exciting news as the Marrickville area is generally pretty devoid of good ones.

We had heard many different things about 2204....that it offered tapas on weekends, served good wine with cheese platters, that it was a great little bar...it was becoming the stuff of legend to the cafe/bar deprived folk of Marrickville.

So late on a Saturday afternoon we finally decided to pay a visit....


First impression was very good, the exposed brick walls give the room a lot of character as does the mismatched but very comfy looking furniture.

The bar though small, looks promising.

We notice a chalkboard that claims "Tapas on the Weekend"....Buggles & Squeak love a shared plate experience, so we were looking forward to the tapas.
We take a seat at the back of the restaurant & are quickly brought the menu.

Shock, Horror!
No tapas, no shared plates....just your very standard, typical cafe fare. Bacon & Eggs, Eggs Benedict, Club Sandwich, Steak Sandwich......you get the idea, we had the feeling we had walked into the wrong cafe. What is it with all the hype about this place?

We decided to stick it out as we were hungry and lets face it Marrickville doesn't have a whole lot more to offer.

We had a tough time deciding on what to order, not because of the myriad of choice, but because of the lack of choice.
Finally Buggles decided on the Club Sandwich & I on the Steak Sandwich, Buggles ordered a milkshake with hers & I ordered a Green Super Bok beer.

Super Bok apparently comes in a Green or Red, the Red is standard & the Green I'm told by the waitperson, has a citrus twist. Imagining this to possibly taste like a Corona (after lime has been squeezed into it), I ordered the Green. It was nothing like a Corona & pretty much tasted just like a 'shandy'...which is a drink I have never understood, why taint perfectly good beer with lemonade? 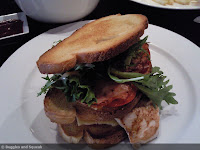 Our meals arrive & while they are not bad, they are just your standard Club & Steak sandwiches.
No interesting ingredients, no organic chicken, no wagyu beef...nothing to raise them above average. We also ordered a side of  fries to share, these were just your standard 'cooked from frozen' variety....no hand cut chips here!

I have no idea what this cafe is about...do they serve tapas? What about cheese plates?? Is it open after dark??? It would seem the answer to these questions is no.

There is so much lost potential here. The space is really interesting & has a great feel. It would make a great late night bar & tapas joint.

There seems to be a lot of talk about what 2204 'might' be....but what it seems to be is just another run of the mill Marrickville cafe.

Posted by Buggles and Squeak at 5:35 PM

I have to disagree I think there is a lot of good places to eat in Marrickville.

Pho Bac has one of the best Pho's in Sydney.

Alchemy has been noted as being in the top 10 of coffees in Australia.

There is a lot of good vietnamese as well and all reasonably priced.

The Corinthian is also a sold Greek restaurant. So come and try the suburb again you may be surprised what you find.

Not disputing that there are good places to eat in Marrickville, just not any really great cafes. Have been to Freepour, The Post (many times), Kelby's (many times)...of the ones you mention only Cafe New Deli stands out as somewhere a 'little' different.
We just think cafes should try to offer a menu with a degree of imagination.

We live locally and tried 2204 when it opened. Amazing space but boring food, bad coffee and disorganised service. Gave it another go this morning... It always seems busy so hey, maybe they'd fixed a few things. Seems not - the coffee is better but the menu is basic and not well done, and the service is still terrible. Someone please open nearby and give them a run for their money.

Pretty silly comment there, she didn't say anything about Corona did she? It was your assumption. Thanks for the review though, saved me a trip.

No John, she didn't mention a Corona - which is why I said it was what I had IMAGINED.