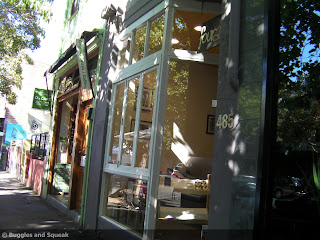 
Fouratefive has recently received much fanfare from a variety of food writers so Squeak and I decided to see if it really could withstand the Bar Mattino comparison test!! For us a cafe worthy of a return visit must offer some of the usual breakfast suspects (and do them well) and it must offer something different to the run-of-the-mill. We also like to see a cafe offer some organic fare - but you can't win them all the time. Fouratefive in Surry Hills, on paper, seems to tick most of the boxes.

The Fouratefive website clearly says that it is open daily from 7am, and because Squeak and I have heard that it can be quite difficult to get into on a weekend, we decide to get there for around 8:45 - hoping that all the Surry Hills locals would still be in bed. Unfortunately, their website is incorrect, as on Sundays the staff decide to get a little extra shut eye themselves and open up at 9:30 in the morning. We decided to hang around though and it was not long before a bit of a crowd began to gather, awaiting the opening of the cafe that recently received Time Out's first 5 star rating for a cafe.

9:30 arrives and we are soon seated with menus. The space itself is quite simple, eclectic and funky. Music is quite loud - but not so loud you cannot hold a conversation, and it is a part of the vibe of the place. The staff are youngish and while I have read some people say there is a level of pretention about the place - we didn't find it to be so. 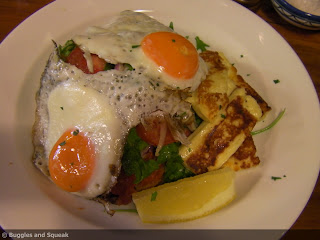 The menu does tick one of our 'cafe boxes' however with some of the old favourites for any cafe serving breakfast, but a few different items also - such as the Morroccan Baked eggs, and the Homemade creamed corn with bacon, eggs and sourdough. I decided to order the Mexican breakfast (as I have always been a sucker for one since Digi.kaf). The Mexican breakfast arrives with some sourdough toast topped with beans, salsa, loads of rocket, avocado cubes and two fried eggs. You can choose to have it accompanied by bacon or haloumi and I ordered the haloumi. The first thing I noticed was how perfectly cooked the eggs were. The breakfast itself was quite tasty - the eggs had good flavour and the haloumi was delicious. I have to admit that I have since had this again and  I would have liked less rocket (and less of the tough stalks) and more beans - as they were really quite tasty.  The mocha that I also ordered was great for me - very strong in flavour, but it must not be to everybody's liking as the people next to us left theirs virtually untouched.  So, the Mexican breakfast was good and flavourful, but I must say not as good as the Mexican themed breakfasts at Digi.kaf. 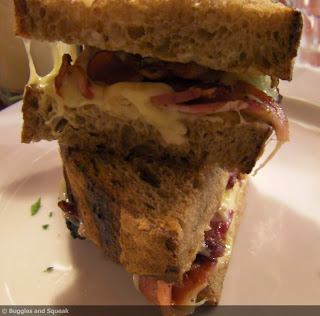 Squeak chose the Gruyere, ham, béchamel  and potato/fennel hash toasted sandwich - except she opted to substitute the ham for bacon. When this arrived it was certainly impressive. It was prettty big and looked moist and delicious.
Squeak LOVED this sandwich and has been having dreams about it since. The potato and fennel hash added a great flavour and the gruyere was stretchy and while the béchamel was gorgeous, Squeak did think the sandwich could have benefited from a touch more of it. I managed to grab a (large) bite of the sandwich and the flavours were really good, and unusual.  It certainly made me keen to try some of their other famed sandwich offerings at lunchtime ('pulled pork' being the main drawcard for me). 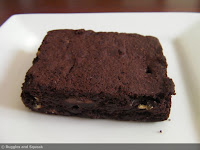 We also decided to order a couple of the sweet offerings from the window display to enjoy later in the day. I ordered the chocolate brownie, and Squeak chose the vanilla slice. The brownie had an unusual texture. It was quite chocolatey and I did like it, but I do not know that it had the gooey chocolate texture that I look for in a brownie. The vanilla slice had excellent pastry and custard, but Squeak does like the sweet hit of icing that often comes with a vanilla slice, and this one didn't have it. 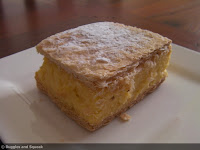 So - what is the Buggles and Squeak verdict of Fouratefive?? We liked it a lot, and it did offer a variety of tempting options. The prices are reasonable comparatively speaking (although I was annoyed that I was charged for the haloumi as a 'side', when adding haloumi to the dish was a menu offering and was cheaper.)
I'm not sure it is the best cafe in Sydney - to be honest we really do have no idea why Bar Mattino doesn't receive higher accolades and media attention - but it is a good cafe and we will return.
Buggles

Posted by Buggles and Squeak at 2:27 PM

Interesting review! :) I do find that Time Out reviews often differ to how I find a place.

I work just up the road on Crown St. and have heard fantastic things about fouratefive. I've never actually been but what the heck, now that I've read this I'm making a beeline for a ham and gruyere sandwich aswell as my coffee next saturday morning!

The ham & gruyere sandwich is exceptional....so much so that as much as I want to, I can't order anything else.

Lorraine...this is a great cafe no doubt, but 5 stars? not so sure.

Interesting review! :) I do find that Time Out reviews often differ to how I find a place.

There's probably a very good reason for that.

do you guys own Bar Mattino as it is becoming more and more obvious from your blogs and reviews that you MUST have some connection to this cafe as you do nothing but praise it and compare every cafe you mention to it and always give Bar Mattino the upper hand, come on guys be a bit more transparent as we can see right through you now. If Bar Mattino was so good the it would get the attention you keep saying it deserves, its such a shame that you bring down other cafes to try and elevate Bar Mattino. I'm not the only person that thinks so, other foodies think the same

@anonymous....seriously how did we bring down fouratefive??? we love this cafe & have eaten there often.

Don't know what your personal issue is with us, but clearly you have one.
Perhaps you're the one that needs to be a little more 'transparent'.

oh...and on this occasion we say the Mexican breakfast is not as good as the one at Digi.Kaf, which is yet another cafe we DO NOT own!