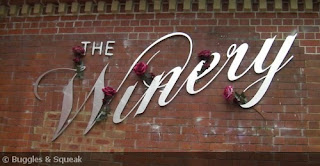 285a Crown Street
Surry Hills
(through the old
sandstone gates)

Sydney certainly seems to be embracing the notion of the 'wine bar' - something that Melbournites always seemed to have in their favour. The Winery by the Gazebo group is one such Sydney offering - adding Surry Hills to their existing Manly and Elizabeth Bay clan. Buggles & Squeak enjoyed another stupendous dinner at Bentley Restaurant & Bar on our return from Melbourne and observed that The Winery certainly seemed to be attracting a lot of business.  Last week we decided to see what the fuss was all about. 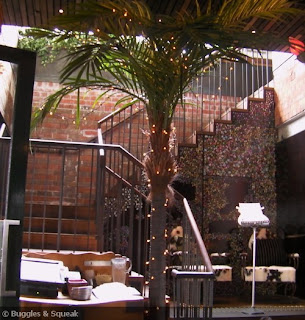 The first thing that you notice when you walk in is the interior design. It is gorgeous! We are not interior designers, but it strikes us as being a mish-mash of all manner of styles and eras that all work together to create a very eclectic, but very cool space. The Winery is divided up into a a variety of 'spaces' that can be booked, but they also keep about half of the restaurant unbooked too, so you can always have a go at just rocking up. 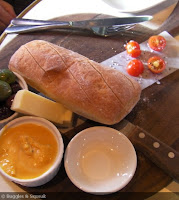 The menu is really a menu focused on having something for everyone.  It is not too flash; it has some tasty sounding dishes and is really well priced. I don't think there is a main meal over $25. We decide to start with a shared plate of warm bread with olives, cheddar and 'today's dip' (which on this day was pumpkin) as well as a plate of Northern Spanish Serrano Jamon which has been aged for 14 months. 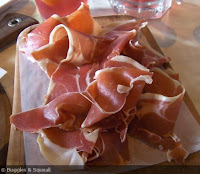 We (and by that I mainly mean  - me) love 'jamon'.   The bread was warm, the cheddar had a nice bite to it, the olives (especially the green ones) were huge and meaty and the dip had a good but unusual flavour. It also came with a scattering of halved cherry tomatoes, that strangely enough - as they seemed more like a garnish -  were really well seasoned, fresh and delicious.
The jamon was thinly sliced (although I do perhaps like it sliced even more finely) and had the right balance of fat and meat to make it rich, salty, creamy and delicious. It seems strange - just eating a plate of what is just ham - but it is really good.

We accompanied this with a jug of Rose Wine Sangria that had strawberry and lemon wedges with Creme de Fraise strawberry liqueur, Bianco Italian Vermouth and lemonade. This was really refreshing, although not very 'boozy', but it worked well for lunch.  It isn't a huge jug, so if you go with a group, you will definitely need to buy a few to keep everyone lubricated! 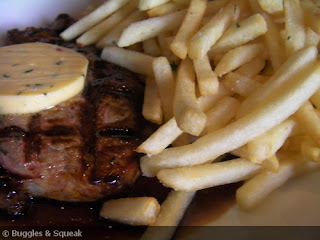 Squeak (surprisingly) ordered the 'Steak Frites' which was a grilled sirloin with a Cafe de Paris butter and a side of french fries. Now, for those of you who have a problem with 'petite' serves - then The Winery may well be what you are after, as the serve of fries that accompanied this bit of steak was huge! The steak had good flavour and the butter mixed nicely with the meat juices to form a lovely sticky sauce - which the fries mopped up nicely. The meat did perhaps have a few too many chewy bits - but it was okay. 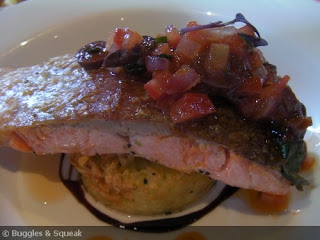 I ordered the Oven roasted ocean trout with rosti and a tomato and olive dressing. The fish was cooked perfectly, and the potato rosti was a good size and managed to be plump, properly cooked through, and crunchy on the outside. The olive and tomato dressing however was what really made the dish sing. It had really good flavour. 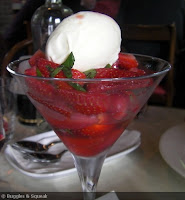 Following this we decided to order a bit of dessert, and Squeak opted for the Cointreau soaked chopped strawberries with Balsamic Ice cream. The dish looked very pretty on arrival, and the strawberries had some chopped basil through them also. Squeak thought it was nice - because strawberries are nice I suppose, and she did actually like the addition of basil, but was unsure if she could detect the balsamic in the ice cream. 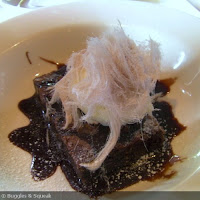 I ordered the Double chocolate brownie with fairy floss and vanilla ice cream. The brownie was gooey, warm, chocolatey and delicious and the fairy floss added some nice texture and flavour. The ice cream however was very hard and had an unusual flavour.  Squeak and I wondered if perhaps I had received the Balsamic Ice cream that was supposed to go with the strawberries (?)...

What was a really nice touch however was that we received a complementary glass of muscat each with dessert. It finished the meal off beautifully (although we still think we preferred the Hungerford Hill muscat that we sampled and purchased on a trip to the Hunter Valley earlier in the year.)

The service at The Winery is very good - although it does get slightly distracted once they get busier... so we cannot be sure it would be as good on an evening visit.  On this occasion however it was very friendly without being too familiar. The Winery is a space that you can really see yourself coming to with a group of friends to enjoy some good food, some great drinks in a fabulous atmosphere.  We're pretty sure we will return!

(PS - be sure to check out the toilet signage.... and the variety of daily 'special events' on offer.)
Buggles 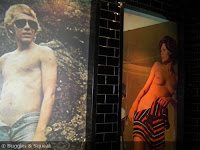 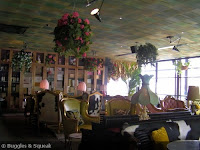 Posted by Buggles and Squeak at 7:46 PM

That looks great! And I'll keep in mind the serving sizes when we're looking for somewhere to eat with hubby :D