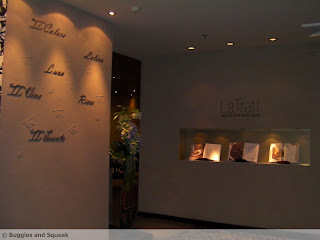 
We were heading out on a Saturday evening to visit with my mum. Rather than our usual reservation at Riccardo's we decided to try somewhere different. Mum ranks Italian as her favourite cusine, so we decided to give La Tratt at the Fairfield RSL a go.


The Sydney Morning Herald Good Food Guide awarded La Tratt a score of 13.5 in their 2009 and 2010 editions, so we figured this was going to be a pretty good dinner for three.


We arrived at 7pm & at that stage the restaurant was still fairly empty. We were directed to a very large table in a nice corner of the restaurant. Not long after we are seated the drinks trolley arrived (that's right - the drinks trolley!) & we ordered a large bottle of Voss sparkling mineral water. Next to arrive were the warmed olives, sourdough & olive oil....we all tucked in.

Buggles & I were pretty impressed with the menu, but as we glanced over to mum we noticed she was wearing what the family now refers to as, her 'Nanna face'...this face means there is nothing on the menu that remotely appeals to her; she looks at it with such disdain, it is as though we are asking her to swallow poison. This was bad. 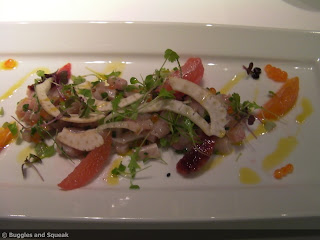 Finally entrees were decided on, Buggles began with....
Tartare di Kingfish, hiramasa kingfish tartare with shaved fennel, citrus, Yarra Valley salmon roe and blood orange oil.
She thought the shaved  fennel had the brown shade that begins to occur when it's been sitting out a little long, but other than that it was a pretty dish.  The serve was quite generous with lots of cubed, meaty kingfish, the different citrus elements added a nice acidity, the fennel gave it some crunch while the roe gave that delicious 'pop' of the sea that Buggles loves so much. 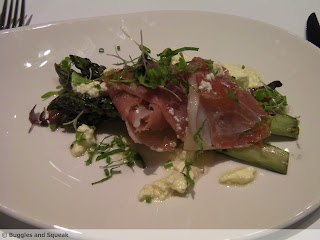 Mum ordered the special of Asparagus, Prosciutto & Fetta, she did enjoy this dish but even though the asparagus is cooked perfectly, with just the right amount of bite, mum declares it is underdone....she does finish this dish though.  I think it was the prosciutto that won her over! 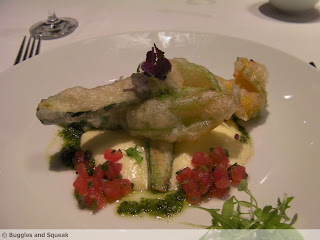 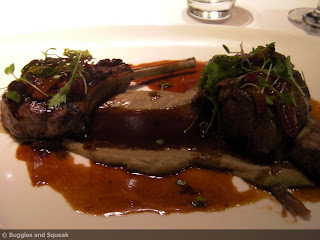 Buggles followed her entree with Lombata di agnello, slow cooked lamb shoulder with char grilled lamb cutlet, roast peppers, basil and aubergine puree. This was another winner with Buggles, the lamb cutlet was tender, moist & pink, while the slow cooked shoulder was succulent & pull apart delicious. She was a little perturbed by the slight skin that had begun to form on top of the sauce, but it didn't detract from the flavour. 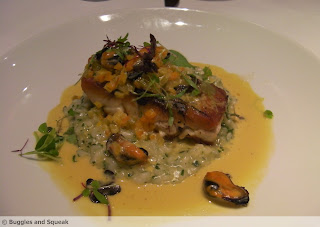 Mum, after much, much deliberation went with Barramundi con le cozze, Northern Territory wild barramundi fillet with Spring Bay mussels, herb risotto and saffron sauce. This was a nice thick fillet of pan fried barramundi sitting on top of fragrant, herb risotto. Mum spent most of the meal lamenting that they should have served the fish with chips instead of the risotto. I sampled the risotto & it was well cooked & had a really light & fresh flavour, it wasn't heavy at all. Mum did not enjoy it and couldn't give a reason why....other than the lack of chips! 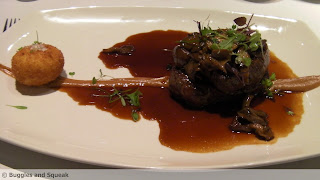 Filetto di Angus, Cape Grim Black Angus fillet with confit garlic puree, fried polenta cake, wild mushrooms and veal demi glaze. The offering of a grass fed fillet is always a bonus for me. This arrived as two thinner slices of fillet, that somehow were still cooked medium rare, the crumbed & fried polenta cake was crunchy on the outside & silky smooth within, the confit garlic puree was sweet with a mild garlic flavour & the veal demi glaze was stickily fabulous.

Buggles & I then decided to share the Piatto di formaggi, cheese plate with taleggio, mature pecorino and gorgonzola dolce latte with truffle honey, lavosh, poached pear and olive bread. I have to say that each of the cheeses were very mild & lacking in any real flavour. This was unfortunate as the three varieties on offer are usually some of our favourites. The poached pear however, was a revalation.


The desserts were another letdown. 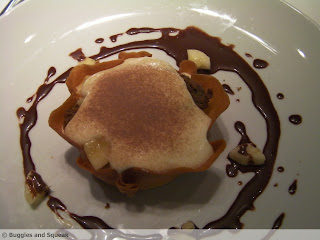 Buggles loves tiramisu & tends to order it often, the offering at La Tratt... Tiramisù con biscotti, tiramisu with frangipane crisp, coffee biscuit, banana and chocolate sauce, was fairly average and the inclusion of banana a little strange, certainly not the best tiramisu that Buggles has eaten.  It wasn't bad - just not great. 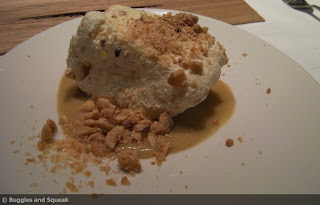 Mum was once again stumped at dessert, nothing was taking her fancy, she however decided to try Almond Freddo pralina semi, almond praline semifreddo with coconut, hazelnuts and butterscotch sauce. Needless to say she didn't like it. 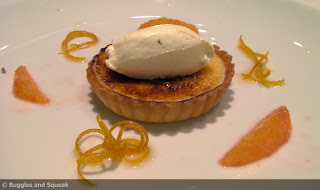 My choice was Crostata al limone e mascarpone, lemon and mascarpone tart with vanilla cream, citrus and blood orange candy.
There was nothing special here, mildly flavoured curd with a dollop of mascarpone & some candied peel. The pastry was thin & crisp which was probably the best thing about it.

On the whole the service is very good, a minor complaint would be that the meals were brought out way too quickly between courses, so that the whole meal felt a little rushed. Another area that could be tweaked would be in relation to any special requests by diners. I suspect mum could have enjoyed her meal if she had been able to order one of the delicious sounding pasta dishes if chilli had been omitted. We were told however that it probably couldn't be, and while I would have expected the waitstaff to check this with the chef, this was not offered.


We were looking for somewhere new out west that the family could possibly dine at from time to time..... La Tratt overall does fit the bill, and is really a revelation in terms of 'club' dining. The mid week specials are really quite amazing, where you can get a 3 course meal with a glass of wine for $45.  That's a bargain in anyone's books.

So, we would like to say that we will return, however, based on the 'Nanna face'...I doubt this will ever happen.

Posted by Buggles and Squeak at 10:01 PM

What a shame your mum didn't seem to like the menu. It sounds like you enjoyed yourselves though. Perhaps she wanted to go to her old favourite? My dad can get like that if he doesn't get to go to his favourite place.

I think you may be right...we always try to take her somewhere new, but she does have her old favourites...I think we have finally got the message.