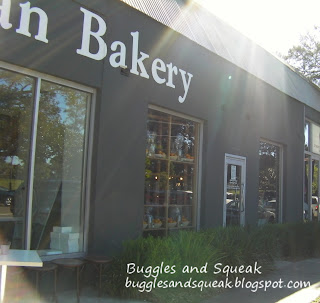 Squeak and I were making the trek to Croquembouche at Banksmeadow to order some Christmas treats so we thought we'd pop into Brasserie Bread for a shot at breakfast.  Whenever Squeak and I think of the name 'Brasserie Bread' memories come flooding back of the first ever time (many, many moons ago) we tasted the sinfully warm caramelised garlic bread with melted parsley butter poured over the top - courtesy of Danks Street Depot.  Anyone who can concoct such a bread really does deserve a visit.  Squeak and I had dropped in (and 'dropped in' is a euphemism for driving significantly out of our way to a rather industrial part of Banksmeadow) some time ago, but were not overly fussed by the variety of options on the cafe menu.  This second visit proved more fruitful.

The menu is, without doubt, small in scope, however the options are on the more unusual end of the spectrum for breakfast fare, which is something that Squeak and I do look for in a cafe. Squeak decided to order the Florentine Panini, and I was a little surprised, as bread is not usually something she likes to eat - however, I guess we were sitting in an Artisan bakery... so it makes sense.  I ordered the Slow cooked pork and sweet potato hash with egg. 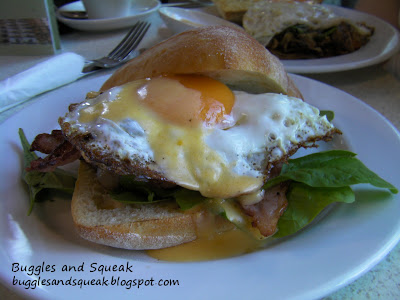 Food comes out very quickly and we tuck in.  Squeak's Florentine Panini is quite large, and the panini looks very 'bread-y', however Squeak ate all of it and found that while most panini's are too dense for her liking, this one was surprisingly light and delicious.
﻿
﻿

The Florentine came with bacon, spinach, a fried egg and hollandaise sauce. Squeak found the egg perfectly cooked and when the soft yolk melded with the hollandaise, it added just the right amount of moisture to the dish. The hollandaise sauce could have done with a bit more tang though. Squeak was very impressed with the abundance of bacon, and how crispy it was, while the spinach did seem to be there more for colour than flavour. 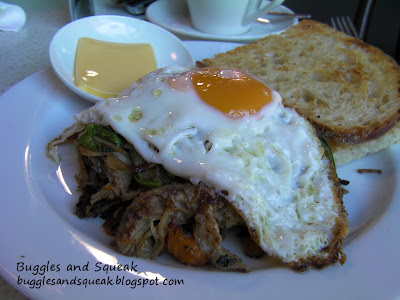 My slow cooked pork with egg arrived with two thin slices of a beautifully sour, and toasted, sourdough bread. The waiter was so confident that I would love this dish that he promised me anything else on the menu for free if I didn't like it... what a challenge!!  Regrettably (or not)... he was not wrong!  This dish was absolutely delicious, and I could easily have polished off another. The pork was very tender and fully flavoured. The accompnying flavours and textures had perhaps a slight Asian influence I think, with a hint of sweetness from the caramelised onions and sweet potato. It almost reminded me of a very upmarket sping roll filling.  I don't know if that description can fully capture how delicious this breakfast was however. The fried egg that lay atop the pork was well cooked and the soft yolk was then able to be mixed through the pork mixture underneath.  This is a dish that I will be thinking about for days to come, and will absolutely return for. 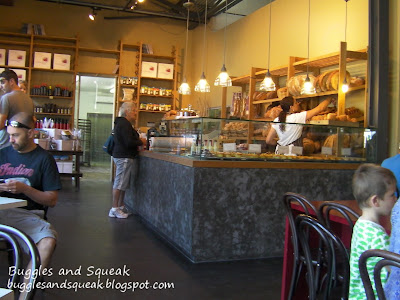 Brasserie Bread also has a patisserie area to the side of the cafe that offers many tempting baked goods to pick up on your way out, and they also offer a variety of cooking classes throughout the year for kids and adults alike.  The website conveniently offers an online ordering service that allows you to order goods from home to simply pick up instore. 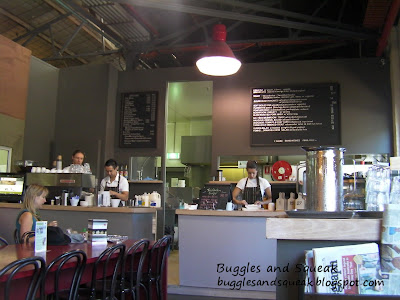 Brasserie Bread is a very popular spot, for how seemingly out of the way it is, but the food is so good, and the produce is of such quality, that we can certainly see why.
Buggles

Posted by Buggles and Squeak at 12:09 PM