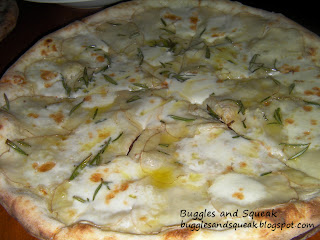 
Following our visit to Top Level Woodfire Pizza Bar, Squeak and I were on a pizza mission and Gigi in Newtown seemed to call us - largely because of a potato pizza we spied sitting on their menu. On arrival Gigi already has a number of tables taken, and we opt to sit towards the back where we expect things will be significantly quieter... how wrong we were!

The back of Gigi is quite dark which meant firstly that it was very difficult to read the menus, secondly it explains why the photographs aren't great and thirdly it perhaps explained why once there, we seemed to be largely forgotten by the waitstaff. We sat, and sat... and sat some more until I managed to grab the attention of one person... and then we sat some more. Eventually our order was taken, but the waiting is really not on.  This area of Gigi also suffers from very poor sound levels. It was so noisy here that you really could not conduct a proper conversation, although this may have also been influenced by the large group of blokes at a nearby table.  Having said all this, we really were here to taste the food...

We wanted to see how Gigi compared to Top Level in a variety of ways, so we decided to order the tomato bruschetta to start, followed by two pizzas (the Patate and the Funghi e Stracchino) and a Rocket, Parmesan, Walnut and Pear salad.... we were hungry! 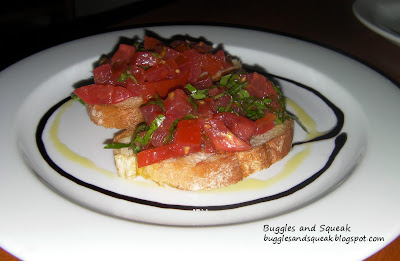 The bruschetta was nice. The bread was good, the tomatoes were juicy, the basil was fresh and the balsamic glaze around it had a nice acid sweetness to it. However the tomatoes, as juicy as they were, lacked a great deal of flavour and the olive oil didn't have that strong pungency to it that made the Top Level bruschetta really flavoursome. It was nice - but we have had better. Top Level also had a better range of starters overall. 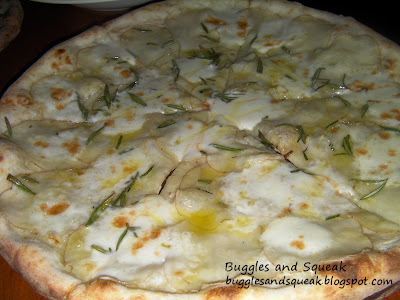 When the pizzas arrived we were a little taken aback by how large they were, but the bases were thin so we thought we'd 'struggle' through. The Patate pizza had VERY thinly sliced potato (which was good) with buffalo mozzarella, garlic, rosemary and truffle oil. This was really nice. The base was very thin and the woodfired cooking gave it that great, slightly charred underbelly beneath. The mozzarella was creamy but I did feel that a bit of extra salt would have lifted the flavours, and there was no salt on the table so I couldn't try my theory. 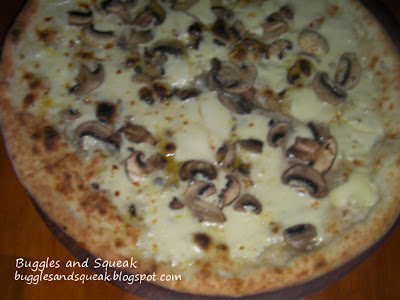 The Funghi e Stracchino pizza had mushrooms, garlic and Stracchino cheese. This, admittedly, does not look great in our photos (remember the poor lighting!!), but it was quite tasty. I do think it could have been aided by a few more mushies but the cheese, although quite delicate in flavour itself, seemed to give the pizza a slightly sharper bite to it, which I liked. Once again, the base was great. 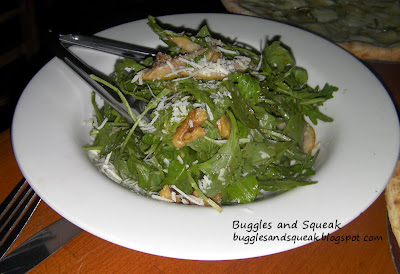 Gigi certainly offers a better selection of salads than Top Level. The rocket, pear, parmesan and walnut salad was nice, but I do much prefer this salad to be served with a blue cheese as the strength of this flavour works better - but this might just be a personal thing. 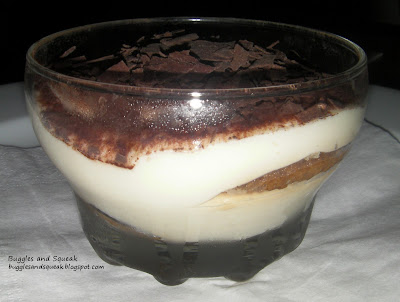 We decided to do the final comparative test, and ordered the homemade Tiramisu and a Ricotta cannoli to share. The cannoli was really nice... the ricotta was creamy and sweet... really good, and I would order it again. The Tiramisu however was quite disappointing. There was not enough moisture for our liking with the sponge fingers, nor anywhere near enough of that nice boozy hit we also enjoy. The mascarpone was nice, but the Tiramisu at Top Level had another flavour dimension to it that we couldn't pinpoint, but worked really well. 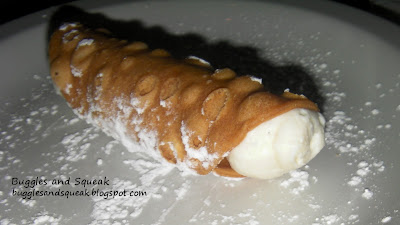 So, the food here is undeniably good. It is certainly one of the best pizzeria's Newtown has to offer - actually it is better than most pizza you find in most places. Unfortunately, it possibly suffered in our estimation due to the fact we had visited Top Level so recently. The base, the sauce, the flavours of the pizzas at Top Level were certainly superior, as was the Tiramisu.

Service wise, we were quite put off by the fact we had to wait so long to have our order taken and we seemed to be forgotten a bit in the back section, but the wait staff were freindly enough, if a little distracted.

We walked away from Gigi with not too much taken out of our wallets and with the idea that we will probably come back for the pizza when we don't want to go to the heart of Newtown, and on a weeknight when the noise might not be so overwhelming. Gigi is good - but not great!
Buggles

Posted by Buggles and Squeak at 7:31 PM

You might have preferred the rocket salad to come with blue cheese instead of parmesan, but that would be a complete bastardisation of a very traditional italian salad which is and probably always will be rocket, parmesan walnut, pear with the finest olive oil and balsamic. And no I think blue cheese would be horrible, accounts for the choice in pizza, potato?! If you're going to revue Italian food you should have a clue about it.

Ha, I always love these anonymous arseholes who jump in with their comments intended for no other purpose than to try to make a fool of the person writing the review. I am well aware that the old rocket and Parmesan salad is classic Italian fare, so what? I still prefer the versions I have had where the Parmesan is substituted with blue cheese, like i said it is a personal preference. As to the potato pizza, seems pretty standard at most good pizza restaurants from Gigi to Da Mario-it might not appeal to you, but it appeals to plenty of us. And finally - seriously dick, I know plenty about Italian food. By the way, love the new spelling of "review" I thought a "revue" was a multi-act theatre thing - but hey, I could be wrong, you might know as much about the English language as you do Italian food.