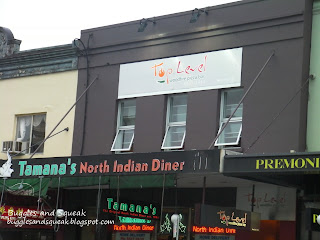 
Newtown has no shortage of pizza restaurants, they are scattered throughout King Street & beyond. Some are genuinely bad, some average & some quite good, but there has never been a truly great pizzeria in Newtown....until now. 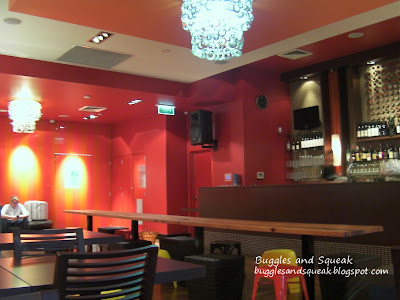 Top Level Pizza Bar resides where ‘Posh Spice’ once did.


We had never visited Posh Spice, but on entering the restaurant we get a definite feel for what Posh Spice must have been like. The décor has a decidedly ‘Indian’ feel & we suspect not much effort has gone into changing the look of the restaurant. 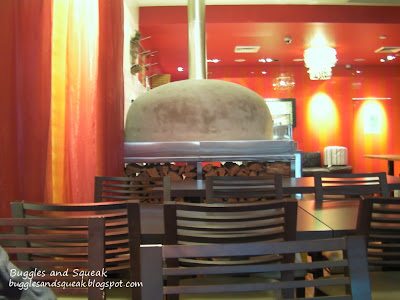 The space is large with ample seating. The room is dominated by the bar to the right & the large woodfire pizza oven to the left. 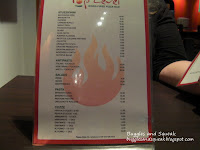 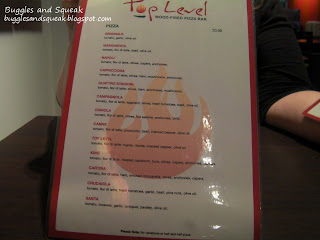 We are seated not far behind the oven & peruse the menu.
We decide to start with a few appetisers…bruschetta, olives fritte & mozzarella fritta. 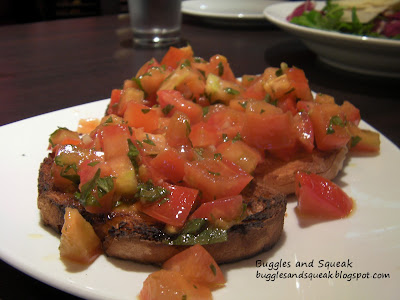 The first to arrive was the bruschetta, 3 pieces of ciabatta strewn with ripe, tasty tomatoes, basil, too perfect seasoning & a good dash of olive oil. 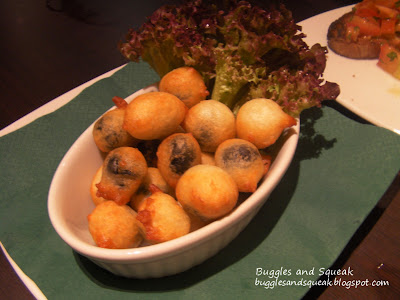 Next up were the olives fritte, black olives coated in batter & deep fried. I found these very moreish & it was only after a while, that I realised I was popping them into my mouth one after the other without stopping for breath. I had probably eaten about five of them before I figured that Buggles hadn’t had any. When Buggles finally managed to push my hand out of the way & secure one for herself, she wasn’t as impressed, she thought there was too much batter, not enough olive. I gladly polished off the bulk of this dish.

(It was at this point the camera battery died….can you believe it??? Worse still, I didn’t have my mobile phone with me which at least has a 5 mega pixel camera, we were forced to use the 2 mega pixel camera on Buggles’ phone. The results, or lack thereof, bear witness).


Following this... the Mozzarella Fritta, four wonderfully thick slabs of oozing, stringy, battered mozzarella. I am of the opinion that most cheese benefits from deep frying. The batter here was much lighter, barely encasing the cheese. Truly delicious….clogged arteries be damned! 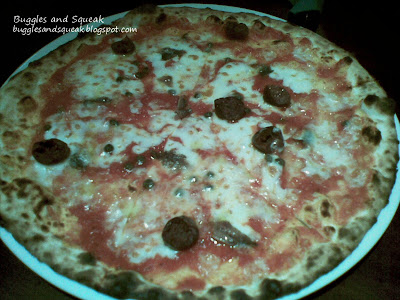 
Now this was pizza perfection. The base so incredibly thin it was bordering on transparent, yet somehow it still retained that slightly chewy aspect that makes a pizza base so divine. It was also lightly charred & bubbly. The tomato sauce was rich, full of flavour but not overpowering, succumbing to the wonderful smattering of capers, olives & the delectably milky fior di latte. 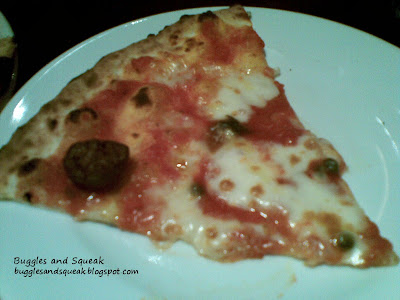 We demolished this in record time & lamented the fact that we had not ordered a second. 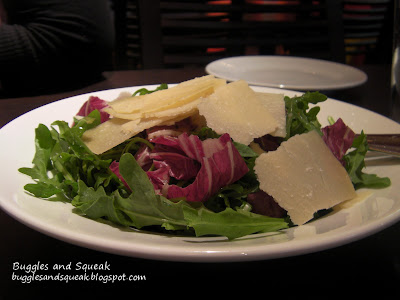 We also ordered the Amara Salad, which consisted of rocket and radicchio with shaved parmesan & a balsamic dressing.


To finish off we decided to share the Tiramisu. There are two options, traditional or berry….we went traditional.


This was a very good tiramisu, in my opinon it ranks second only to the tiramisu at Café Sopra (Buggles ranks it third after Ventuno). Rich, thick, indulgent mascarpone; beautiful, boozy biscuit...who could ask for more?


Much has been written about the poor service & surly waitstaff at La Disfida during Ruggiero Lattanzio's reign. In terms of service Top Level is the polar opposite. The service here is almost too efficient, you are chewing on your last mouthful & the plates are cleared away from under you. While this may be preferable to rude, gruff service; it does make you feel like you can't sit back, relax & take time to digest your meal. Hopefully just teething problems & things will improve in time.


We are very pleased to have a pizza restaurant of this calibre in Newtown & will no doubt return soon.

Posted by Buggles and Squeak at 9:44 PM

Deep fried olives in batter! Sounds yummy. I've been to Posh Spice - doesn't look like the decor has changed much at all.

The deep fried olives were very good...possibly only made better if they were big, meaty green ones stuffed with ricotta & anchovy.

Yes we figured not much had changed decor wise...but why spend the money if you don't have to...it works in a weird kind of way.

Hmm, sounds good. I wouldn't have given it a thought without a positive review, but we may now have to check it out. Especially if it rates over Gigi (which we have on our 'to try' list).

I ate at Top Level on New Years Eve 2010! We were referred to Top Level by another Restaurant owner. The Decor is ghastly to start. The waitress could not speak English well. The owner was grumpy and very inhospitable. The menu was not in English so we had to ask for it to be translated by the non-English Speaking waitress. I ordered what I thought was a tomato sauce based pasta with proscuito. What I received was Raw diced tomato with large chunks of ???meat and Rocket. Basically a Spaghetti topped with Salad. The smells of the indian restaurant below wofted through the open windows..... as I set aside my meal to enjoy the coming Pizza.... The Pizzas were very thin based..I like this but in the words of my 7 Year old..." Mum I prefer the pizza when it has normal ham not just flakes !" On leaving the restaurant we partook of the complimentary sweets on offer only to be scoffed at by the pizza cooks behind us... they called out "why don't you take the whole bowl!" Very Very Disappointing...If the customer service and Menu do not change I don't see Top Level lasting very long!!!!

FoodieFuch... your experience sounds very disappointing. We were not overwhelmingly fussed on the service, but put it down to teething problems. All of the pizzas are written in English so we were very clear as to what was coming with our meals... maybe they will consider doing the same for the pasta.
As for the decor... it certainly still looks like it is an Indian restaurant... but it didn't really offend us.. and we were sitting quite far back in the restaurant so did not notice any of the smells you describe.
We can only write about our experience... and we really liked the food we ate there, but bad service, like it appears you received, can certainly damage an overall experience.

Disappointed with the service!!
Food: really liked the deep fried olives starter, the potato croquettes were a bit bland/dry. The pizza was lovely. Overall, I was satisfied with the food. However, my friend ordered the pasta de la casa which was an very unspiring dish, swimming in oil! Dish went back without being eaten.
Service: a bad dish can happen, but what really spoiled the experience for us was the service. The table was not well waited at all, and the worst bit was the owner's unfriendly attitude, leaning towards being really aggressive bout the feedback on the pasta dish! Incredible!
The overall decor has hardly been updated since the time it used to be an Indian restaurant, and the smell of India spices and dishes still floats in the air.
I am NOT going back there. Good luck to the owner to keep or gain customers with that disgusting attitude.