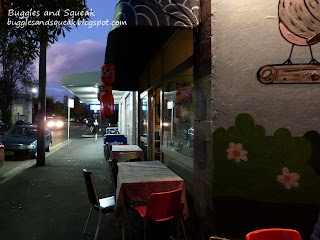 I love, love, LOVE Japanese food. Now that I've managed to get Squeak to come around to my way of thinking we have been attempting to sample some of the places around the traps that offer up a variety of Japanese goods. Squeak happened to mention this little place to me one day and that they served 'Japas' (a take on Japanese and tapas) and ever since I have had a hankering to try it out.  We were due a meet up with M1 so decided to make Love Grub our destination.

Love Grub is a licenced cafe 7 days a week and serve regular cafe fare (all day breakfasts, burgers, gourmet sambos etc) as well as a selection of sushi rolls and Japanese style 'Lunch boxes'.  Thursdays to Sundays though, they transform into a 'Japas Bar' in the afternoon and through to the night. The chef has been mastering Japanese food for the last twenty years, 10 of which he spent living in Japan, so we feel pretty confident the food is going to be good. 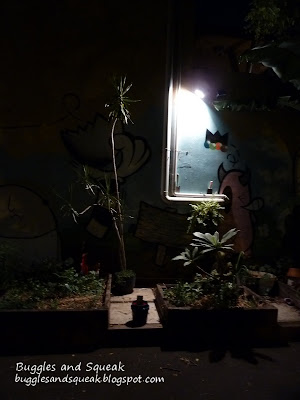 The place itself is pretty simple and unassuming, but if the weather is right (and it was) then there is plenty of seating outside which is quite lovely in the evening by candlelight.

We are quickly guided through the menu by our waitress, who was very friendly and helpful and, at her suggestion, we order a couple of Mac's 'Sassy Red' beers. These are from an NZ brewery and have all manner of funky 'types' of beer.  Not being a beer connoisseur, I don't know too much about all the nuances of flavour in beer or about the Saaz hops that has gone into it,  I just know if I like it or not.. and I'm impressed by the Mac's 'Sassy Red'. 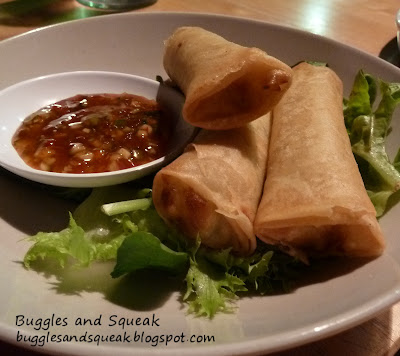 While there are a variety of 'Dinner Box' options (which do look like excellent value), we decide to stick with the share plates and commence with some obligatory Vegetable Spring Rolls.  There were three per serve and came with a chilli, coriander and cucumber sauce which was a great accompaniment to the crispy morsels of spring roll. 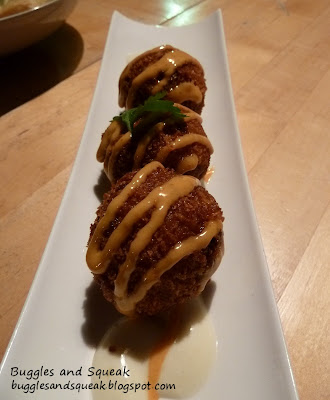 We move on to the Shitake and Blue cheese Rice balls that were crumbed and fried and came with a spicy mayonnaise. These were excellent! They were crispy on the outside and moist, creamy and flavourful on the inside.  I think we should have ordered an extra serve of these!! 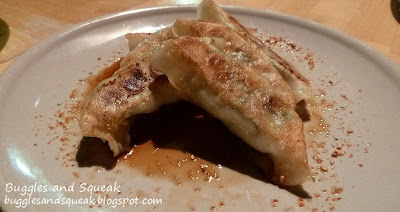 M1 and I decide that some Prawn Gyozas are a MUST!  They came with a tzuyu dipping sauce and aren't a great deal to look at initially, but they were de-lic-ious! Tasty and moist on the inside while the prawns still had a nice bit of bite to them.  I probably could have eaten a plate of these myself. 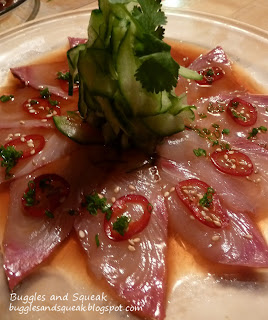 Kingfish is a newly discovered joy of Squeak's (thanks to Brent Savage's masterful treatment of it at The Bentley). So we order the Kingfish Carpaccio with a citrus ponzu dressing.  The fish was delicate both in presentation and flavour. It was delicious and fresh, but  - we have to say - does not pack the same punch as the kingfish ceviche that sparked the kingfish love affair, even though we know they are attempting different things. 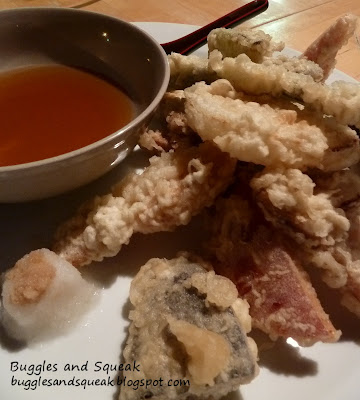 The Vegetable tempura has a light crisp batter and it tatses good, although I will admit to enjoying the vegetable tempura at Mongers in Bondi better.  (Yes, I am fully aware of how strange that sounds - but I just liked the crispness and variety of the vegetables better). 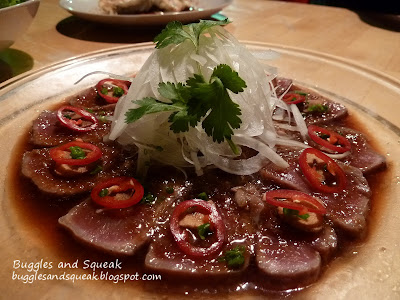 The Beef Tataki is  rare slices of sirloin with a tataki sauce.  This was also beautifully plated and the meat was incredibly tender and 'moreish'. 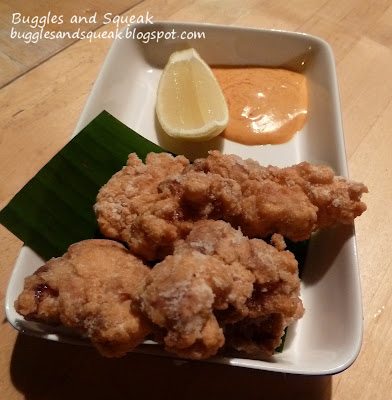 Finally the Karaage Chicken comes out. This is just one other version of Squeak's beloved fried chicken - but Japanese style. The outside was crunchy which worked very well with the moist chicken beneath. Possibly the Karaage Chicken at Iiza eclipsed this slightly in terms of flavour, but it was very good nonetheless. 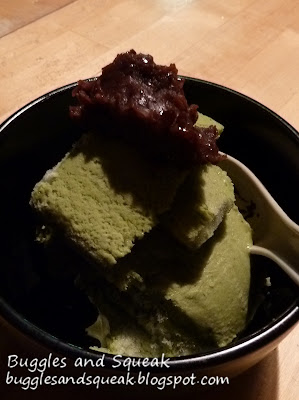 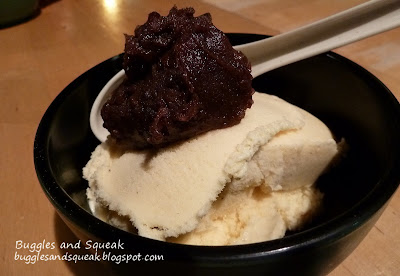 Squeak then orders the Green tea ice cream and I get the Vanilla bean ice cream with adzuki beans. The green tea ice cream tastes like creamy sweet green tea - strangely enough!!  My vanilla bean ice cream was ok - perhaps a touch too sweet and the adzuki beans are perhaps not to everyone's taste - but I quite enjoyed them to accompany the sweetness of the ice cream.
There are many other things on the menu that I would very much like to sample, such as the sushi, the agedashi tofu and braised pork but the food we had here on the night was delicious. Perfectly sized to share and everything was very fresh, beautifully presented and, the ultimate criteria of all, really yummy!! Combine this with professional, warm service and I think we have a winner!
Buggles

Posted by Buggles and Squeak at 3:22 PM

Love the look of the beef tataki. Yum. I like a Japanese cafe for a quick cheap meal.

@FoodiePop The Beef Tataki was one of the standout dishes, packed a punch flavour wise & was incredibly tender.

I love the idea of Japanese Tapas - sharing lots of little dish is just the best way to eat. I like the sound of those little balls with blue cheese in them - yum.

i just had lunch here today & i'm waiting for summer to go back for japas!