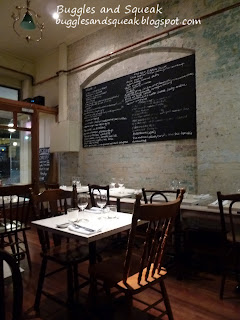 Our plan for the weekend was simple. Catch a movie on Saturday, potter about the house a bit in between, then lunch at the Four in Hand on Sunday. A spanner was thrown into the works when I spotted this comment on Pickwick's facebook page "All-day red wine braised beef cheeks / heirloom carrots / caramelized eschallots / garlic confit mashed potatoes". I am obsessed with beef cheeks, and as we had been meaning to revisit Pickwick's for dinner (after really enjoying their brunch), I convinced Buggles to forgo lunch at the Four in Hand in favour of dinner at Pickwick's.

When we arrive the restaurant is all but empty & we are sat in a dark corner under the stairs. We have forgotten that the restaurant is BYO, so I dash up the road & pick up, what turns out to be, a not so great Cooks Lot Pinot Gris (I really have to stop picking wine just because I like the look of the label).

We start off with some Luxe Sourdough which is served warm & is quite delicious. 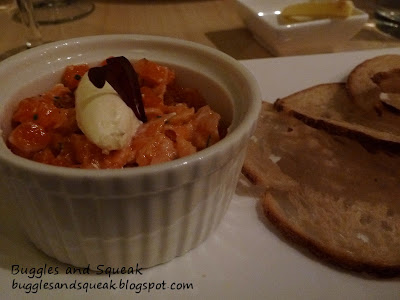 Buggles' entree of Ocean Trout Rillette (white wine-poached ocean trout, cured ocean trout, remoulade, caviar, chives and crostini) is a rather bland affair. It seems to be devoid of any flavour or seasoning. So while you wouldn't say it was inedible, you do have to wonder...what is the point? 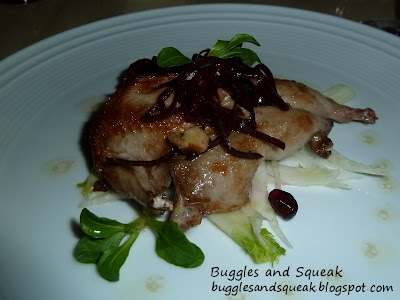 I do much better with my Roasted Quail (pomegranate and rosewater glaze, macerated beetroot, fennel and walnuts). The skin is wonderfully crispy, while the meat very moist & tender. The slightly acidic pomegranate & aniseedy fennel work very well together & complement the quail beautifully. A very good dish.

﻿
Buggles follows her trout with the Sirloin (Bindaree 100 day grain finished Angus with butter beans, potatoes gratin, king oyster mushroms and a port-red wine jus). The old adage 'you eat with your eyes first', was never truer than in this instance. The very pale grey slab of meat that Buggles is presented with is incredibly unappealing on sight. I guess the menu doesn't state how it is cooked, but it does look like it has been boiled first, then waved over a grill. On cutting it, the interior is also a grey/red colour. There is also quite a bad aftertaste to it. Surely a somewhat accomplished chef is capable of searing a steak & serving it medium rare? The 12 year old cooks at our local pub seem to manage just fine.
This is without doubt the worst tasting & most poorly presented steak that either of us has ever encountered.
The accompanying gratin is dull & flavourless, the same can be said for the limp butter beans & the port wine jus is all but non existent. 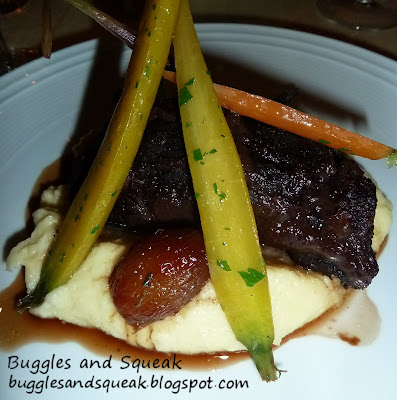 I fair marginally better with the Beef Cheeks. For an all day braise the connective tissue is still pretty well connected. This is the first time I have had beef cheeks where I have had to use a knife & fork to separate the meat, usually a fork is all that is needed. The meat isn't tough, but it isn't unctuous and melt in the mouth. Also, unusually, it isn't served with very much of the braising liquid, so it is a little dry as well. The best thing about this dish is the mashed potato, which is creamy & garlicy.


Our main meals have banished all thought of dessert, so we ask for the bill.


Having enjoyed brunch at Pickwick's very much, we are quite stunned at how truly awful dinner was.


While we do think we will return for their brunch, I don't know what it would take for us to return for dinner.

Posted by Buggles and Squeak at 6:16 PM

Oh that's a shame when a favourite disappoints. Lol, I sometimes choose wines because of the pretty label too. Hope you make it to Four in Hand soon :)

What a bummer. Hopefully just a bad day for them in their kitchen.

I think I'm with you on that one Tina, it is a great spot for brunch. however, i can't recall now what came first, dinner...or brunch?

what a shame! hopefully they arent this bad all the time :s

I love Pickwick's for brunch and I've been eager to try their new housemade Black Pudding - so we went along on the weekend and just weren't pleased at all.

There was no black pudding, the waitress didn't write down our orders, in spite our prompting her to do so when she couldn't repeat them back to us - so inevitably they were wrong.

Coffees came after the food and the staff were unfriendly and rude - such a change from what we had fallen in love with.

It might be awhile before we get back to Pickwick's - I had been curious to try them for dinner. Which I believe came first.

@Jasmin....What has happened I wonder? Our dinner there was so disappointing. Have to say service wasn't too bad, but the food just didn't cut it.

I know that in the start up period they were hiring a lot of new staff. I'm just not sure they've hired the best people.

They're still relatively newish and smallish so I'm hoping that the problems will be sorted out at some near point.

But I'm not holding my breath.

A shame, but glad I read your review. I saw them today, but thought I would check them out first.

I had an excellent beef cheek at Tommy's Beer Cafe in Glebe last week (review coming). It's an entree ($11.90) on parsley mash with a rosehip jus.

@MissDissent...Thanks for the Beef Cheek tip....Tommy's at Glebe now on the list.

I wish I read your review this time last week. We were heading down to flying fish, but I changed my mind and decided to try pickwick's for dinner.

Same as you - totally forgot about the BYO. The sad thing about it was the wine was the best thing about the evening. To top it - they had only x1 bottle of mineral water... strange when they are only a few shops down from a supermarket.


Starters:
Trout - bland / boring really was nothing, looked totally differnet to the one in your photo.
Quail - nice, simple dish but whilst one portion was warm the other was cold?

Mains:
Salmon - the biggest dissapointment of the evening. Two of the items were missing and when we asked, we were told they had run out. No replacement, no apology. Maybe they might have told us this before ordering?

Sirloin - obviously 'medium' is a difficult cooking point, mine was medium well at best ???? but the thing that saved it was the gratin and mushrooms.

So despite everything, we soldiered on to get dessert - still had 1/2 bottle of wine (had 2 bottles).

Dessert:
Cheesecake - this was the only dish served as discribed. The funny thing about it was the portion size. Two servings came - different tables - one was huge and the other was a tiny. You can guess which one we got?

The worst thing of the night was the couple sitting across from us were celebrating a birthday. The guy had arranged a special cake for the girl. The girl gets up and goes to the bathroom and the waitress brings the cake out to him. He is trying to tell her not yet and wait, but she ignores this to the surprise of the whole restaurant only for the surprise to be ruined by the girl coming back. The dude was pissed and dissappointed.

Sometimes places need to stick to what they do best - dinner service isnt it.

shame, look like a good menu, maybe me and the missus will try brekkie there. If you like beef, the hive bar does an excellent short rib, might be worth a try on your sunday arvos

Upon leaving this morning on our second visit, my partner and I vowed NEVER to go back!
Unbelievably RUDE staff, coffee that took an eternity to be served... painfully awkward silence that was momentarily broken by crashing/smashing sounds erupting from the kitchen.
It was one stumble after another... we had plenty of time to observe the ongoings of the morning (40 minutes to be served two plates of breakfast in a near empty venue) like watching a flustered waitress running into the restaurant carrying shopping bags of food supplies... Oh dear!

The food is good, when it's served! The coffee is great, when it's served. We waited SO long that my partner missed out on his and as I went up to pay, the barista sheepishly pushed his flat white across the counter in front of him. Too late!

You want it to be as good as it looks but it seems the staff are inept and almost out of control in holding the reigns of what could be a great Newtown regular... Such a shame.