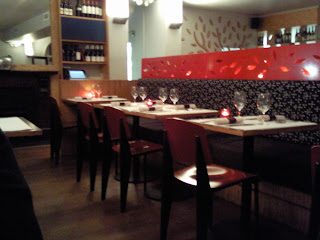 Buggles & Squeak have been regulars at the Bentley for many years now.
We enjoy the relaxed atmosphere, appreciate the  friendly & knowedgeable service, we indulge in the amazing cocktails & devour the inventive cuisine.


On our arrival Wednesday night it was good to see some of our favourite waitstaff still on board. We were greeted warmly & directed to one of the larger tables by the window. 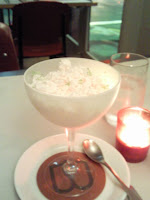 The waiter asked if we would like to start with our "usual"...that being the very cool (literally!) 'frozen popcorn hemingway', liquid nitrogen is added to a conventional hemingway mix, it arrives at the table granulated & smoking.
This cocktail needs to be eaten with a spoon, the almost too cold mixture disolves quickly as it hits your tongue becoming quite creamy in texture...put simply, it is too good!
Based on this, how could we say no...we order two & we are underway. 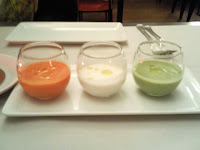 We start off by ordering 3 items from the tapas menu to share. The first to arrive was the 'Gazpacho Three Ways' three cool, silky serves of gazpacho, each a successful expression of the main ingredient. The tomato is sweet, the almond mild with a hint of nuttiness & the cucumber incredibly fresh & zingy, they each have an acidic finish, however the flavours are very well balanced.

Next to arrive was the 'Parmesan Custard with truffled asparagus' a thick swirl of parmesan rich custard, embedded with tiny squares of lavosh & surrounded by tiny mounds of truffled asparagus. The custard is creamy & indulgent, the lavosh adds a nice crunch & the asparagus benefits greatly from the earthiness of the truffle. 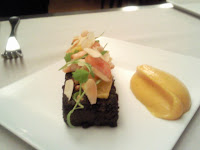 Finally the last of the tapas dishes arrives 'Black Sausage with school prawns & mandarin' this was by far my favourite of the three.

A rich, mildly spiced black pudding, topped with school prawns & slivered almonds sitting beside an intensely flavoured, sweet mandarin puree...we have long been amazed at what Brent Savage can do with a mandarin. The saltiness of the sausage is perfectly complemented by the sweetness of the mandarin & the crunch of the almonds. More please! 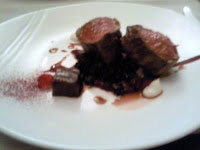 For the main I order 'Fillet of Black Angus Beef with smoked beetroot, mushroom & horseradish'.
Two thick, tender fillets cooked perfectly medium rare sitting on top of rich, earthy, chewy mushrooms which in turn sit on top of a sweet beetroot puree, add to this squares of seriously smoky beetroot & tiny dollops of horseradish foam. The flavours work really well together & the horseradish foam has a real kick to it. 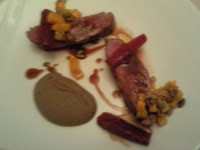 Buggles orders 'Roasted Duck Breast with lentil puree, pumpkin & rhubarb'.
It was a toss up between the duck and spatchcock, but at the end of the day she is a sucker for duck paired with fruit of some sort. The 'tart' nature of the rhubarb was an intrigue, and so duck it was. The duck was perfectly cooked, and the sweetness of the pumpkin, along with the smokiness of the lentil puree, the acidity of the rhubarb and, surprisingly, the earthiness of the seeds scattered throughout, made this a perfectly balanced plate of food.... not to mention, delicious. 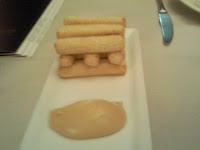 All of this was accompanied by 'chickpea chips' with garlic aioli. We've ordered these many times, and they are a revelation. Don't go expecting a potato chip, but they are a clever take on an old favourite. A crispy crumb coating encases a creamy chickpea centre. The aioli that accompanied them had a rich, roasted garlic flavour which was delicious - but rich. 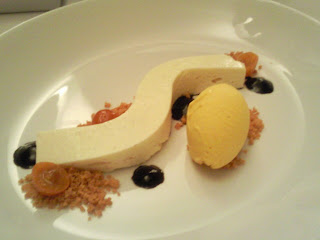 Dessert can be an adventure at The Bentley, and Bugggles still has her first ever dessert from here listed in her Top 5 desserts of all time.
Tonight, I order the 'Cheesecake with Spiced Pumpkin icecream', coffee and preserved lemon' (except on this occasion it was candied cumquats - which we weren't informed about - so it's a good thing I like cumquats!) Brent Savage has a well earned reputation for doing amazing things with cooking technique and extracting the most amount of flavour from an ingredient, but this dessert is also a testament to the work of art that food can be. It was a beautiful plate.

A thick, creamy, lusciously cheesy strip is accompanied by beurre noisette crumbs, dappled across the plate tiny, gooey dollops of an intense coffee syrup, offset by the delicate sweetness of the candied cumquats & finally a not too sweet, spicy (think nutmeg, cinnamon & maybe a hint of ginger?) pumpkin ice cream, so smooth, so perfect.
Buggles isn't as drawn by any of the other dessert options, but has had a hankering for some time for a couple of items offered on the sweet "Afters" menu. This is where you can order sweet treats - tapas style. Thinking that they were going to be quite small (especially because they were so cheap!), Buggles orders two: the Hot Ricotta Dumplings and the Chocolate Honeycomb bar... I figure I can always get a sampler of these items also. 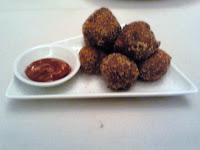 When they arrived, Buggles realised they are probably designed to be shared amongst more than just one, so the serves are actually quite large. The Ricotta dumplings are golden brown and crunchy on the outside, dusted with cinnamon and sugar, and when you bite into them it is like biting into creamy warm air - which is the ricotta.  They come accompanied by a strawberry sauce/jam that looks a bit like tomato sauce.... but it is just like a less sugary version of the filling inside a jam donut (and Buggles loves herself a jam donut!)  They are spectacular!  Buggles does wonder if her eyes were too big for her belly, but apart from offering me one or two, I notice she manages to scoff them all (I cannot blame her.) 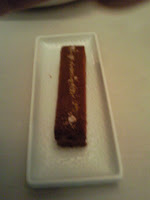 Then it's the chocolate and honeycomb bar.  When it arrives it is exactly as the name suggests. The coating is dusted in bitter cocoa powder and sprinkled with pink salt.  For anyone left in Sydney who is still unconvinced about the salt and chocolate combination - you really do need to give it a try. It is a surprisingly firm bar of virtually solid chocolate, with honeycomb throughout. It isn't rocket science, but it certainly is tasty. It is chocolatey, it is creamy, it is sweet and a bit salty - in short , it is delicious. This, however, does do Buggles in, and she is forced to reluctantly surrender the final mouthfuls to me!
So we wash the month's worth of food down with a coffee for Buggles and a (you guessed it) green tea for me, and then we waddle out of that place - ready to do it all again soon!
Squeak....with a side of Buggles!

Posted by Buggles and Squeak at 3:46 PM