Adriano Zumbo has received a lot of press lately, and this certainly increased as a result of MasterChef Australia with those magnificent sweet creations. Squeak and I have always been aware of this patisserie, but had never given it a go ( Note from Squeak : Buggles seems to forget the 3 lush desserts we purchased from the patisserie, the chocolate fondant so rich that my mum could not finish it & she is a confirmed chocoholic!)- which is strange considering my penchant for macaroons. 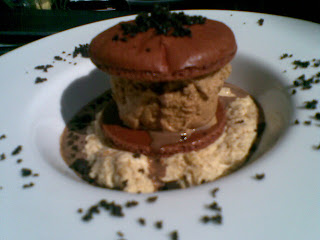 So, we decided try it out.  We went to the Cafe Chocolat, which is just up a bit from the Patisserie, to sit down and sample some sweet treats.
There are savoury items on offer, and some of our fellow diners were partaking of those, but we went straight for what we were really there for - dessert.
I ordered the 'It's not a hamburger... It's a macaron!'  As the name suggests, this dessert is presented in the style of a hamburger made of chocolate macarons, filled with a dulce de leche gelato and chocolate sauce.  The macarons are gorgeously chewy, and the gelato is sweet, 'caramelly' and delicious. All of this sits atop a banana and caramel rice pudding.  I know this might sound a bit odd - but it really adds a different dimension.  The rice pudding is soft, but still with a bit of bite to it. To finish off, there is some bitter chocolate 'soil' scattered over the top, which adds a nice bit of crunch.  I also ordered a butterscotch milkshake which was perhaps ill-advised purely becuse it was all so rich, but those glugs of thick, soft caramel/butterscotch within the ice-cold milk were quite delicious.  I couldn't finish it though, as it did become a bit much by the end of the meal. 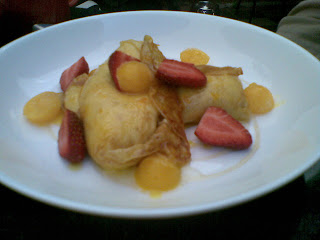 Squeak went for 'Miss Marple Deconstructed.'
This dessert was made for Squeak. Citrus all the way!
Plump crepes stuffed with maple and mascarpone that oozed out when split open. Orange butter glazes the top while strawberries and cold, citrussy orange jellies are dappled across the plate.  It looked great!  Judging by Squeak's stunned momentary silence upon the first mouthful, I could tell she was happy.  Once again, Squeak opted for the Green Tea as a way of counterbalancing the unashamedly indulgent dessert.


The cafe is quite small and we imagine quite busy on weekends, so it might be a good idea to get there early. Cafe Chocolat also sells glorious looking chocolate jewels in all manner of flavours that did look tempting, as well as a selection of macarons.  I resisted.... but as I was walking past the Patisserie, I just couldn't stay strong any longer.  Squeezing past the customers in the packed shop, I checked out the quickly dwindling selection of macarons and opted for salty buttered popcorn, rhubarb crumble and mandarin and tonka bean macarons.   Delish!!  Squeak and I then rolled merrily away home.
Buggles

Posted by Buggles and Squeak at 7:10 PM

That chocolate macaroon looks a bit too good to be true. Your description of it all has made me determined to visit!