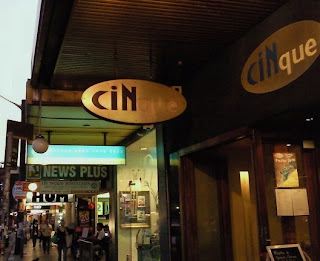 Cinque is a very busy cafe perfectly located right next to the Dendy cinema in Newtown.  This could be viewed as a good or a bad thing though.  It really is convenient if you plan to go to the cinema (as Squeak and I did this evening), and it also ensures that your food is fresh.  Having said that, such popularity can mean a certain nonchalance in altering menus to keep them fresh and vibrant.

Squeak and I have been to this cafe many times. It's right near the Fish music store, the Better Read than Dead bookstore, and the Dendy cinema... not to mention all the other great shops along King St.  It really is in the heart of Newtown - which goes a long way to explaining the long queues on weekend mornings of people waiting to get a table. We decided on an early-ish dinner as the film started at 7... so we managed to get a table pretty easily.  On perusing the menu, it became apparent that it had not changed at all since the last time we'd been - which was probably a good 6 months earlier.
Don't get me wrong, there's nothing particularly wrong with Cinque, it just suffers a little from not feeling like it has to try very hard.  Our dinner there tonight was a case in point. 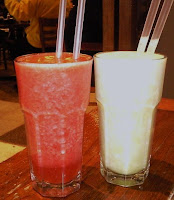 I ordered the goats cheese, caramelised onion, roasted capsicum, basil pesto and balsamic tart, accompanied by a raspberry fruit frappe, and Squeak opted for the beetroot, lentil, goat's cheese and minted yoghurt salad with a 'Lush' fruit frappe.  We also ordered a side of chips (with tomato sauce).... the chips have got to be a guilty pleasure.

For my part I wasn't ravenous so the size of the tart when it arrived was fine - albeit small. Having said that, it is listed under the 'starter' items.  I just thought I'd mention it for anyone who thinks they might order it as a meal. The tart was nice, but to be honest I think that was more a result of good ingredient pairings than fantastic cooking.  How can you go wrong with onion, goats cheese and roasted capsicum?  I was disappointed that the pastry was a small disc of puff pastry however, as I don't think it worked as well as a shortcrust savoury pastry would.
The chips were kind of like those 'steakhouse' style chips.  They were okay as far as chips go, but they certainly were not up to par if you're looking for the perfect, crispy exterior and the fluffy interior.  They hit the spot though.  My raspberry frappe was refreshing, which worked for the balmy evening, but was missing something - perhaps a bit more of the sweet raspberry flavour. 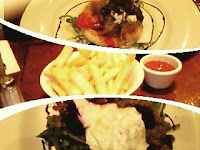 Squeak's salad was greeted with a bit of a groan due to the large amount of lentils on the plate - which she's not overly fussed on.  However once they were eaten with all of the other compents, apparently they worked.  The spinach was crunchy, the beetroot tart and the goat's cheese creamy.  A similar situation to the tart I suppose. Not amazing cooking or preparation - just well chosen ingredients. The Lush frappe has long been a favourite of Squeak's. Pineapple and mint blended with heaps of ice..... delicious!
So, all up, Cinque produces meals that don't aim to win 'chef's hats', but aims to cater for the hordes of hungry shoppers and locals and cinema patrons wanting a quick bite, and while it won't blow your socks off - it is tasty and gets that grumble in the tummy to pipe down! 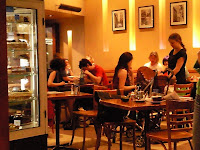 {Btw... they do have a rather tempting array of cakes to choose from - including gluten free products. And... I'm not sure if they still serve it, but they used to have a great italian hot chocolate (almost like warm chocolate custard!)}
Buggles
UPDATE: Went here again for brekky this morning... the Italian Hot Chocolate is back on the menu!  Hooray for simple common sense.

Posted by Buggles and Squeak at 10:33 PM

we still have italian hot chocolate :) hehe its really amazing <3