While Squeak and I frequent Bar Mattino on a relatively regular basis, we do not always write about it, as we invariably order the same things, and to be honest, it is always so consistently good, there is no need. I do feel the need to mention a menu offering that I sampled today however. 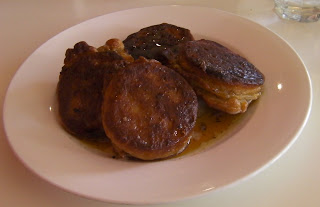 Home made Crumpets with lashings of butter & golden syrup. What presented itself was four spongey looking discs lathered in gorgeous golden syrup, with crunchy edges that had soaked up the syrup and butter. Words cannot describe how good these were! Give them a shot!

Bar Mattino sits but a short distance from the hustle and bustle of Sydney's CBD, and yet it retains the feel of a local neighbourhood favourite.

Going out to breakfast has become the norm for many a Sydney-sider, and often it can end up costing just as much as a dinner at the local restaurant. At Bar Mattino you can expect some of the most interesting menu items combined with incredibly generous (aka cannot finish it) portion sizes in Sydney. 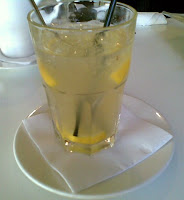 When Squeak and I went there last Sunday we immediately ordered what has become 'the usual' - a large flat white and a lemongrass and ginger iced tea.
The iced tea is a newfound favourite for Squeak. It is light, crisp and zesty... leans more towards the lemon flavour, with a delicate hint of ginger. Perfect for these warmer, Spring mornings. (Tip: If you and your friends all drink the same type of tea, you may well be served just ordering the one pot, and asking for extra mugs.... because when they say 'bottomless' they are not kidding!)

Coffee is good... but not fabulous... but this could have been influenced by the slight cold that I was nursing on the day. Menus on the weekend are slightly reduced than what you will find on week days, but they provide many tempting options, and something to cater for everyone. Squeak and I like to peruse the various food related magazines on offer while we wait for the food to arrive, but there are newspapers and fashions mags also.
Today - as has become usual - I ordered the French Toast (with banana, bac 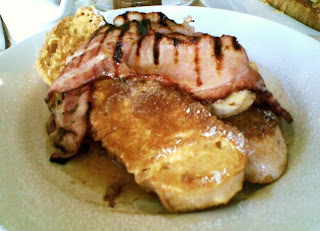 on & Maple syrup). I know it's not to all tastes, but it can be ordered sans bacon. It is, without doubt, the best French toast I have EVER encountered. The best bits are the edges that have soaked up so much of the eggy mix, combined with the sticky maple syrup, that they have been rendered sweetly crunchy. There is a generous swirl of maple syrup to absorb into the huge portion. Squeak even has to admit that this is beyond good... until she remembers that she is anti-sugar at the moment!
And onto what is truly the main reason we keep going back to Bar Mattino... the Welsh Rarebit (served with a side order of slow roasted tomatoes.) Buggles and Squeak love a good breakfast and have frequented many a place across Sydney, but we have not encountered the Welsh Rarebit anywhere else. It is perhaps a nod to the chef's UK background (also found in such menu offerings as Black Pudding), but this rarebit is unparalleled - despite Squeak's valiant attempts to replicate it at home. 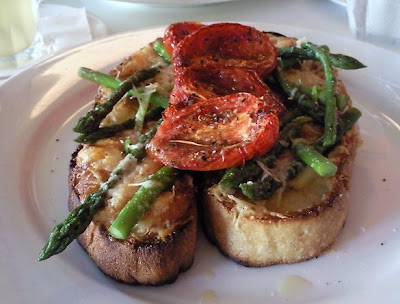 The hand can be a tad heavy at times with the mustard, but this only serves to clear the sinuses, but generally the asparagus laying on the cheesy, mustardy mix that sits atop the large slices of woodfired bread, which is then slightly blackened under the grill, is spectacular. The slowly roasted tomatoes that have now become the staple side-order for this breakfast are, also without doubt, the best we have ever ordered. They can be touch and go in terms of how long they have been roasted, and on today's visit, they were a touch under done, but generally they are sweet and delicious... and work perfectly with the cheesy-mess underneath.
The portion sizes are mammoth.... and it is certainly not unusual to hear the wait staff advise against the 'Big Breakfast' (which includes the aforementioned 'bottomless tea' as well as everything bar the kitchen sink) unless you have not eaten for a week. I don't know if it is a criticism... how can you criticise generosity? However sometimes we wonder if it would be better to offer some meals in small or large sizes, as we can rarely finish ours (and, believe me, we are no lightweights!!)

Bar Mattino also offer Sunday Roast Lunch which has been featured in a variety of the Sunday papers, and they rotate between Lamb, Beef and Pork, with Chicken always on offer. The freshly baked berry crumble muffins are also moist and delicious - perfect for that mid-afternoon nibble with a cuppa whilst lazily reading the Sunday papers later on.... vaguely contemplating that a walk would probably be a good idea!
Buggles

Posted by Buggles and Squeak at 1:26 PM

Yes love this place, I always have the spinach and cheese omlette.