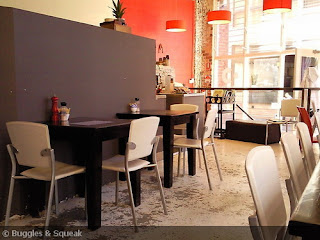 Sa-Su 8-3
Two Good Eggs is another of those popular city cafes tucked away from sight. Organic and natural is the mantra here, so you can indulge in that breakfast or brownie without feeling (too) guilty.
After a big night out and a bit of a sleep in, Sqeak and I needed some sustenance so we headed to our favourite suburb - Surry Hills.  This is the suburb to head to if you need some tucker. Located in the Meta by Starck building, the interior of the cafe is equally as funky - concrete floors (fashionably scuffed) and large sash windows overlooking the streetscape below. 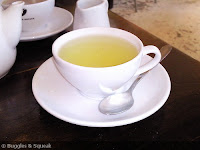 After the rich food of the night before, I needed tea - Earl Grey to be exact.  Thankfully I was served tea leaves, rather than a teabag, and the Earl Grey tasted as it should - florally.  Squeak ordered the usual Green Tea for its antioxidant properties - and it was also good (but, really, how exciting can green tea get??) 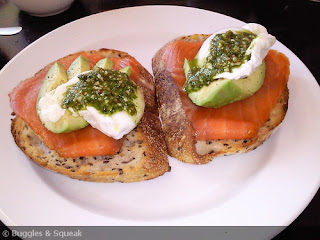 Having said that, this place is right up Squeak's alley.  Organic, pesticide and chemical free, freshly made - you get the drift. I order Organic poached eggs with smoked salmon and avocado topped with a homemade rocket pesto, served on soy and linseed toast. The star of this show was the pesto, and without it the dish could have been called a touch bland.  I did wonder if this could have been influenced by the contrast from our dinner of the night before with its strong flavours. Having said that, the pesto was crunchy and fresh with a real zing to it.  One little gripe would be the toast.  Soy and Linseed may be in keeping with the whole 'healthy' philosophy, but it isn't for everyone, and maybe the menu should mention the type of bread to be used, especially if it isn't a standard type. 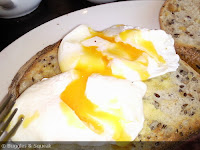 Squeak stuck to house smoked Bacon and organic poached eggs on toast (with the same toast issue as already mentioned.)  The bacon was smoky and quite crispy and the eggs were perfectly poached, but to be honest, nothing to rave about.  A little thing, I know, but the butter also came in those little packets... which always bugs me! 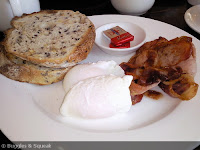 Overall, the breakfast was pleasant enough, but the menu lacked flair and imagination. There is certainly something to be said for the old favourites, but in comparison to some of the city's other breakfast venues, Two Good Eggs seemed a bit 'beige'.  Organic, natural and fresh can also be innovative!
Buggles

Posted by Buggles and Squeak at 6:28 PM