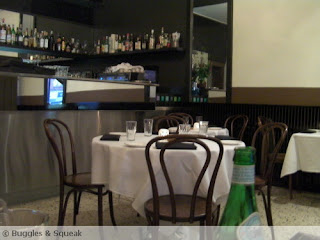 Our recent jaunt to Melbourne led us down a few food paths, and on our last evening we decided that this path would lead to Embrasse Restaurant in Carlton.  This restaurant has been receiving a lot of accolades recently with the chef, Nicholas Poelaert, named Young Chef of the Year in  The Age Good Food Guide. On entering, the dining space is intimate, simple and elegant and is suggestive of a French bistro. As has become our habit, we decided to start the meal off with a glass of Sparkling wine. In this case, I had a Stonier 2007 while Squeak opted for a Kir Royale. 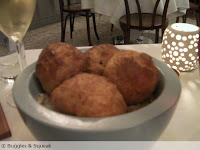 We toasted our fantastic trip to Melbourne alongside some Cheddar Gougeres (delicious cheesy, choux pastry puffs).  While munching away  on these, and perusing the remainder of the menu the complimentary bread roll arrived. One of the choices on offer was a smoked bread roll, which we found intriguing. The flavour was indeed smoky... unusual, but very more-ish, especially with the salty butter. 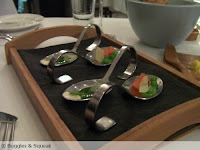 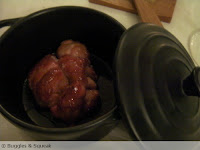 A real theme had emerged with Squeak over this trip, and it was with potato and slow cooked eggs.  If there was a dish that had either of these elements on it, she was going to order it. On this occasion, it was the smoked and roasted veal sweetbreads accompanied by a 64 degree hens egg with corn, black seeds, wombok and sheeps milk.
The theme of 'smoke' was certainly beginning to emerge with this chef... and why not, when it adds 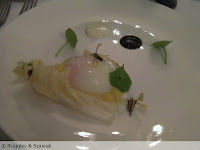 such an interesting flavour element to the food. The sweetbreads came out in their own dish that was opened amidst smoke on arrival. The yolk of the egg had a satisfying ooze, and the flavour of the smoky sweetbread with the richness of the yolk with the crunch of the seeds and wombok certainly made this dish get a big tick from Squeak. 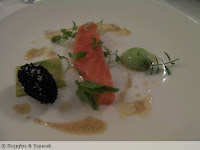 I opted for the Confit of Petuna Ocean Trout with avocado and potato. This was delicious. The ocean trout was incredibly soft and flavourful, and the avocado came both in a cream form and a frozen disc. The potato was coated in a black ash and bread crumb crust that was quite a revelation also, especially in combination with the other elements. The flavours and textures all worked exceedingly well together. 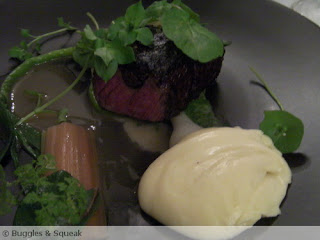 For mains Squeak ordered the Jacks Creek Qld Wagyu with black garlic, chard, confit spring onions, parsley root and coulis. This dish was beautifully plated and was visually stunning. The meat was cooked perfectly, but did not have a strong flavour. The parsley root and coulis flavour seemed to overwhelm. The black garlic was delicious but the chard was a touch bitter. The dish was pleasant, but did not pack a punch.  This was all washed down by a  glass of 2008 Prancing Horse Estate Pinot Noir. 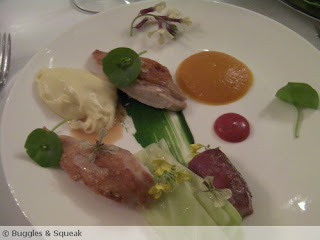 I do not usually order chicken from a restaurant, but on this ocasion I was drawn in (largely by the nettles - which I had been converted to by Vue De Monde). So I ordered the Spring Chicken, nettles, rhubarb, pumpkin, spring cabbage with sweet potato baked in eucalyptus.  This dish was also a beauty to behold when it arrived. The chicken was perfectly seasoned and had a nice crsipy skin, and this, along with the crunch of the cabbage went beautifully with the sweet, tartness of the rhubarb puree and pumpkin. The nettles came in the form of a bit of plate smearing which gave a slight hint of the flavour - but seemed to be more of a visual accent than a flavour one.  We also ordered the Aligot which is a cheesy mash from the south of France. This side dish is served at the table, and you can see why. It is stretchy... which can only attest to the amount of cheese within it.  It was quite, quite delicious!  I washed all of mine down with a 2008 Bernard Moreau Borgogne Blanc. 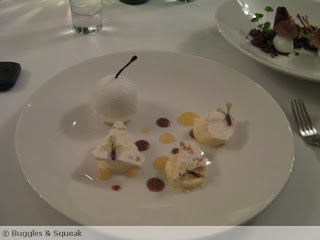 By this stage all thoughts of tackling a cheese course had gone out of the window, and we decide that desserts are a must. I had spied a delicious looking tart earlier, but in the end decided upon the Apple and Egg which is a combination of (... you guessed it!) apple and egg textures - parfait, puree, meringue, nougat... you name it. This was a beautiful looking dessert, and on Squeak's tasting, was better than hers, but in my opinion the dessert disappointed. It really just tasted like apple sauce, meringue and ice cream. It lacked complexity and interest for me. 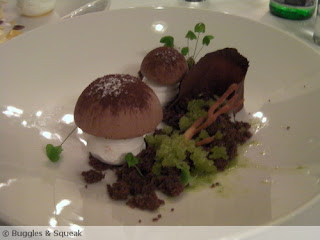 Squeak ordered the intriguing chocolate mushrooms, forest floor, sorrel mint granita and meringue. This was also spectacular to behold. It was quite lovely but ultimately disappointing also. Squeak found that it really just was chocolate ice cream (and not amazing at that), meringue and crumbled chocolate cake. The most interesting element was the sorrel and mint granita, but there was not enough of that to compensate what amounted to a relatively average dessert.  So the final dessert elements were absolutely stunning to look at, but let us down in terms of flavour and complexity. 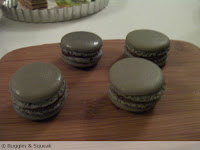 We did feel that the petit fours may make up for this disappointment - although my gut later told me that I had indeed taken things one step too far.  We ordered the chocolate and violet macarons and the petit four plate to accompany our tea and coffee. Petit Fours is something that we have noticed Melbourne restaurants take very seriously, and the size of the serves are quite large thus rendering dessert unnecessary oftentimes.  The macarons were quite good  they had the desired crunch, chewiness and softness with an interesting floral violet flavour with a rich chocolate  ganache filling. 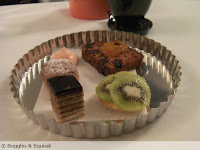 The petit four plate comprised of  a kiwi tart, orange blossom marshmallow, opera cake, passionfruit curd profiterole and fruit toast with citrus marmalade.  See what I mean about not needing dessert! The fruit toast was delicious, but probably too heavy for the end of the meal and the marshmallow, tart and cake were tasty but not spectacular. The real highlight was the curd in the passionfruit profiterole. It was intense and tangy and delicious.

Service at Embrasse is very professional and informative, but not always as warm as the restaurant interiors would suggest. The meal was a delight to read and presented on the plate beautifully. On occasion however some of the flavours did not live up to the expectations created by the menu and how they looked. It is, however, a restaurant we would ceratainly return to if we lived closer.
Buggles

Posted by Buggles and Squeak at 2:36 PM

Hello foodies,
first time i've seen any of your reviews but his one was so thorough and descriptive i'm going to check a few more. Great to have photos too.
thanks,
Tess

For the most part we found this restaurant to be very good. The one letdown really being the desserts. On the whole though, well worth a visit & certainly a restaurant we would return to on our next visit to wonderful Melbourne.