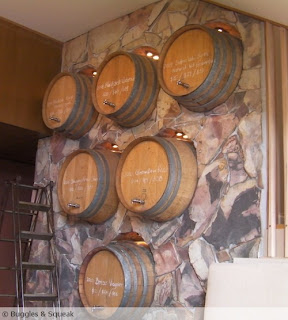 Mon - Fri: from Midday
for lunch and dinner (and in between)

Sat-Sun : from 9am
(for breakfast, lunch and dinner (and in between)
Buggles & Squeak had branched out of Melbourne into Daylesford and had planned to sample some of the restaurants on offer in that immediate area only. On suggestion from Sebastian and Sigrid (of Bar Mattino fame), however we decided to stretch our radius to include Castlemaine and see what the recently opened Public Inn had to offer. The drive from Melbourne would not be too far for a day trip, and the township of Castlemaine is lovely, and steeped in Australian history with many original buildings beautifully maintained. 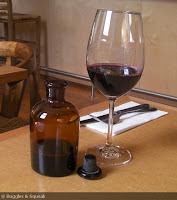 One of the first things you notice when you walk in, is how 'new' everything is. By that I do not mean modern in the sterile, or minimalist sense, but simply that it is clear that the Public Inn has been newly created internally. It is light, airy and has an eye catching wall of wine barrels where you can order locally produced wines by the carafe - 250ml, 500ml or 1 litre.
We order a glass of sparkling wine to begin and look over the menu which has many tempting things on offer. The menu is presented in order of 'weight' if you like, rather than entree, mains and desserts. 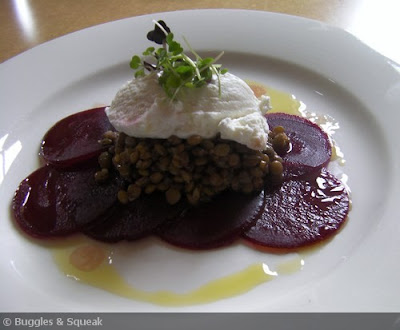 Squeak really wanted to order the warm potato salad with poached egg, truffled pecorino and mustard dressing but her conscience got the better of her (she had ordered some form of egg and/or potato at virtually every meal since we'd arrived in Victoria), so she ordered the Beetroot carpaccio, lentils and fresh Holy Goat's curd. Squeak enjoyed the tartness of the beetroot, that were nicely offset by the earthiness of the lentils and then topped with the creaminess of the curd. 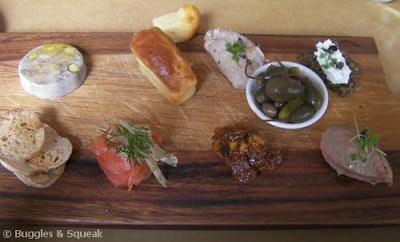 I ordered the Charcuterie plate for 1. Hmmm... on arrival, we wondered if they had thought we'd actually ordered the plate for 2 as it was quite large. Having said that I have years of training behind me, so I managed to polish the whole lot off. It was almost like a tasting plate of many of the flavours and ingredients represented on the menu as a whole. There was a rabbit rillette; duck liver parfait; rabbit, duck and pistachio terrine; atlantic salmon gravlax with a fennel and dill salad; as well as some lentils topped with the Holy Goat's curd all accompanied by mini brioche; cournichons, caperberries and olives.  And that was just to start!  The salmon with the fennel and dill salad was the highlight for me on the plate. This was a delicious, homely way to start a meal - albeit a bit large for one. 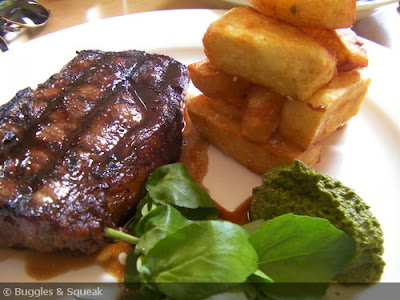 We order a small carafe of the local Syrah (no added preservatives) and then await our mains. Squeak  (surprisingly!) ordered the 300g Rockdale Black Angus Porterhouse steak which came served with hand cut chips, salsa verde and a red wine jus. She was disappointed that there was not a grass fed beef option, but had to make do with grain fed. The meal, when it arrived, was very generous in proportions and looked very inviting. The hand cut chips were golden, the steak looked juicy, the jus sticky and the salsa verde looked fresh. Squeak enjoyed the meal very much, especially the salsa verde accompanying the meat, although did feel the steak was not cooked as perfectly medium rare as she would have liked. 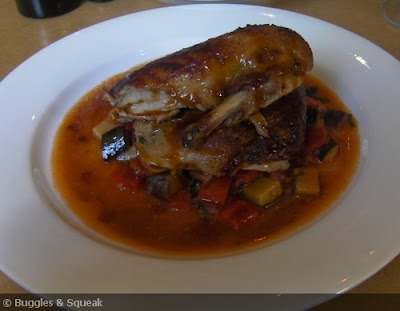 I ordered one of the specials for the day which was  Twice roasted honey glazed Duck, served on top of a bed of vegetable ratatouille. My only concern when I did order it was the ratatouille.  I just wasn't sure that this would pair well with a honey glazed duck - but I gave it a shot anyway. When it arrived, it was, once again, very large... but very appetising.  The duck was incredibly moist, and the skin was crisp and delicious. The ratatouille was also very tasty.  I will admit though, that my concerns about the two together were right. I thought they were each good individually, but not so much together.  Neither really added anything to the other. 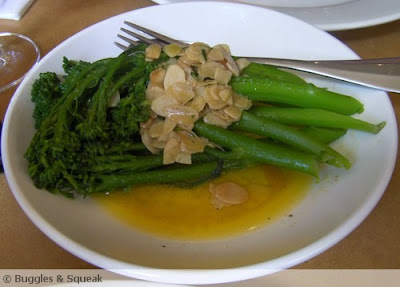 We also ordered some broccolini served with butter and shaved almonds. These were fresh, buttery and the almonds gave it some crunch - quite delicious. I  personally prefer my broccolini cooked a little less, but that is really just personal taste. 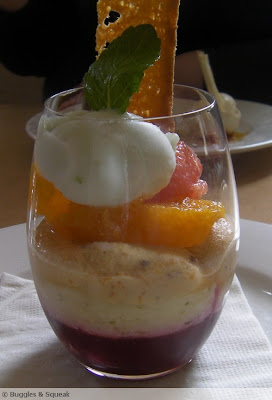 We move onwards to dessert and immediately both Squeak and I see key words that glare out at us - Citrus and Gingerbread.  Squeak orders the Public Inn's Citrus Trifle, and I order the Gingerbread cake with poached pear and honey praline icecream.  The trifle looked beautiful on arrival. There were layers of caramelised orange curd, blood orange jelly, lime ice cream, lemon biscotti and apple sorbet. 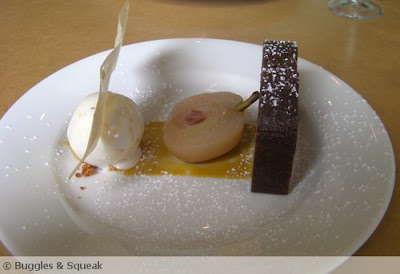 My gingerbread cake was just as it should be - firm, cakeish gingerbread. The poached pear was sweet and the icecream nuttily creamy and the whole dish worked nicely with the cold and misty weather Victoria was experiencing on this particular weekend. I was very satisfied by this dessert. It didn't knock my socks off - but it satisfied and comforted.
Service was warm, informal but professional. The food was better than you would get in the majority of pub bistros. It was generous, comforting, refined and tasty - with only one or two slight misses. The Public Inn is certainly a place we would like to have a little closer to home.
Buggles

Posted by Buggles and Squeak at 3:59 PM

Your review makes me like The Public Inn all over again!